Tomorrow (June 1st) marks the beginning of the Atlantic hurricane season, which will continue through November 30th. On average, there are around 12 named storms (tropical storm or stronger), 6 hurricanes, and 3 major hurricanes. From a numbers standpoint, I generally agree with the majority of forecasts that call for a below average number of storms this season, but one must not focus entirely on numbers. Some of the seasons in the past that brought the highest number of storms had a very low impact to the U.S. and vice versa. As you always hear, it only takes ONE storm. You must always be prepared.

Due to a developing El Nino and the cooler water temperatures across the main development region, there will likely be less activity overall. Even if the water temperatures were to warm up more than expected between now and the active part of the season, a highly sheared environment across the area will likely result in many systems not surviving on the journey from the African coast to the western Atlantic. This year, the atmosphere has responded particularly strong to the warmer waters that have continued to develop across the central and eastern Pacific. Because of this atmospheric response, this has continued to further reinforce El Nino and will likely continue to do so through the summer and into the fall. This development will likely create a more-sheared environment in the main development region along with stronger trade winds at the surface. Overall, the atmosphere could be a bit more stable with a subsiding (sinking) airmass over the region.

The Gulf of Mexico and along the East Coast are the two regions that need to be monitored particularly close this season for potential development, which doesn’t contradict most of the forecasts that have already been put out by the U.S government and private forecasting companies. Even with fewer named storms, the chances of having a few landfalls this year is definitely not out of the realm of possibilities, despite the lull in U.S. impact from tropical systems in the last decade. Again, this reiterates my point that the focus shouldn’t be on actual numbers but instead on development regions/possible impact locations. The areas that could have the highest chance of impact will be the Carolina coast, the western coast of Florida, and Texas/Louisiana. Any tropical system that develops off the East coast will have the tendency to curve out to sea, but the Carolina coastline will be target zone for systems that do manage to get close enough for impact. The two main potential tracks for any system that develops or moves into the Gulf of Mexico will likely be towards Texas/Louisiana or the Florida coast. Any areas along the coast that I didn’t mention also need to monitor this season closely. Despite the more hostile environment that is expected in the main development region, any tropical wave that manages to survive its journey across the Atlantic could organize and strengthen farther west in an environment that could be slightly more favorable. 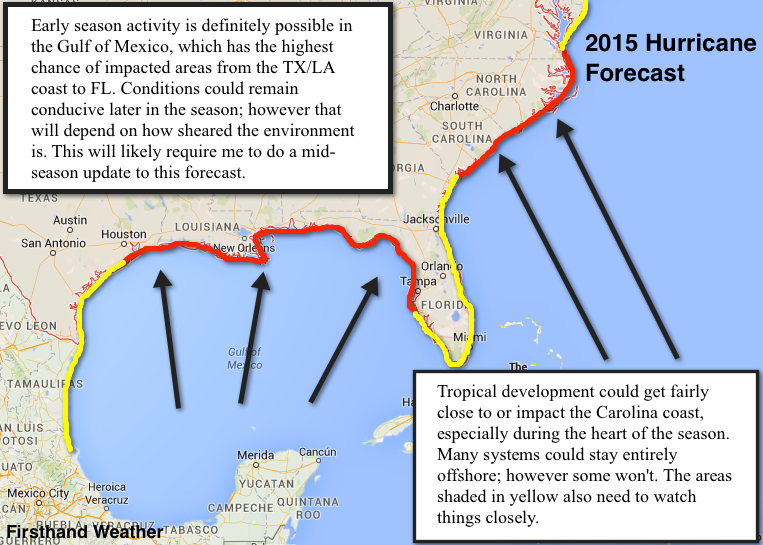 I included the map above to help you to visualize everything a bit more clearly. The map doesn’t include how many times a particular region could get hit, but instead, it indicates what areas have the highest chance of getting hit at least once with a tropical storm or hurricane. This excludes Ana that already impacted the Carolina coast in early May. I must mention that early season hurricane forecasts tend to vary in accuracy from year to year. Conditions can quickly change over the course of just a few months, so an update to this forecast may be necessary around August. Regardless of the outcome of this season, it’s always best to have a plan in place if you live in a hurricane-prone zone.