Another Arctic Outbreak This Week With A Winter Storm

As I have stated so many times before, those who forecast the weather rely way too heavily on forecast models. The problem with doing that is that your forecast is only as good as what the forecast models are predicting. In my opinion, that’s not a true forecast at all. Most people could learn to interpret some NWP model projections with time, but that’s not the coveted skill to have. The real skill that takes years to gain is being able to understand why a model makes sense or not, and then being able to use that experience to explain in simple terms why or why not it’s a viable solution. Forecast models are great when honing in on storm systems and predicting the overall pattern in the short-range, but you CAN’T rely on models at all in the long-range. Especially this time of year, you’re going to be flipping with the models every few days, maybe every few hours.

It’s best to look at what’s going on now and then make some rough predictions for 2-3 weeks down the road. Those predictions won’t be perfect, but they will be much better than relying 110% on forecast models that are prone to large errors. It’s easy to go from model run to model run because a forecaster can just blame model error when his or her forecasts bust. I would much rather have a forecast bust because I missed a tiny or even large variable early on than to have to change the forecast dozens of times. It gives me plenty of time to correct the forecast, and then I learn something new every time. That’s why I’ve been able to discuss a potential storm around Thanksgiving well before everyone else, and still many haven’t caught on to this potential yet. Things can always change with the Thanksgiving threat, but I hope you understand my point. It’s never good to model hug!

What To Expect With This Next Arctic Outbreak:

We’ve been talking about next week’s Arctic blast for a while now, and in this article, I just want to give some specifics and somewhat of a timeline. I’ll wait to talk about the Thanksgiving threat in another article and will focus on the storm system that will be moving through the U.S. today, tonight and early this week.

Below is a 500 mb Geopotential height and Anomaly map for Monday night, and what this basically shows you is a long-wave trough located over the eastern two-thirds of the United States, and a very amplified ridge over the West Coast and up over Alaska. When you have proper blocking like this is place, cold air can get displaced over certain regions in the United States, while others regions warm up. That’s why you’ve been hearing about places like Dallas, TX being colder than certain places in Alaska. Those of you living up in Alaska can vouch for me when I say that it has been much warmer up there than average for this time of year. We still have a negative Arctic Oscillation, which basically means we currently have blocking over the Arctic. Without getting into anymore detail than that, the jet stream has become particularly active over the United States as of late. 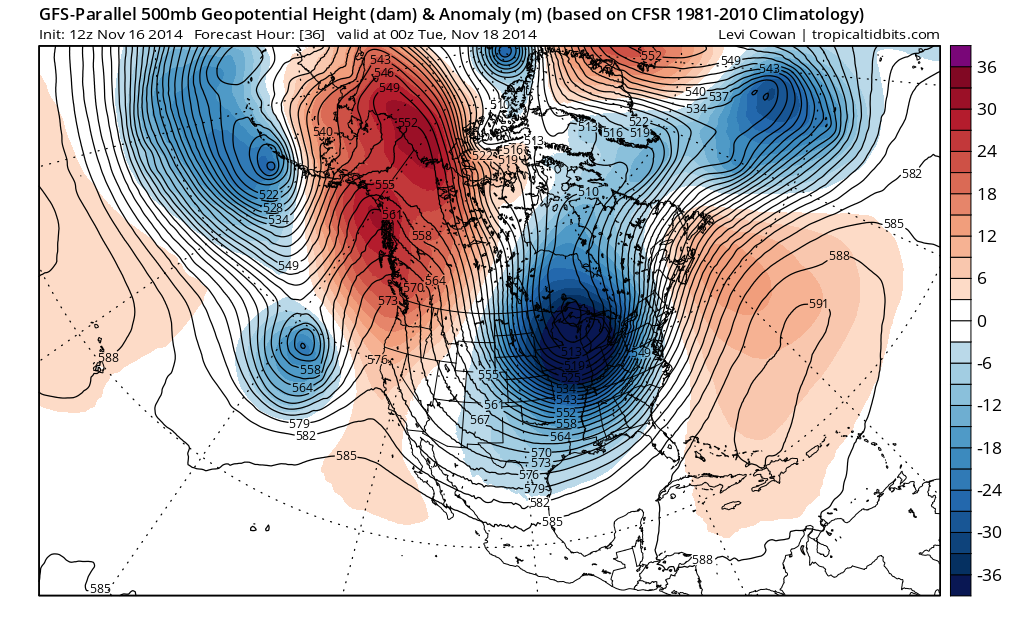 One last thing that I want to note is that the overall pattern this week looks very similar to what occurred in January that brought brutally cold air to a large region of the United States. This cold air is going to be impressive, but if we see this same thing happen this winter, then it’s going to be downright brutal. If you’ve read my winter forecast, you already know that I am predicating this to happen.

Below are the projected temperatures for Tuesday morning: 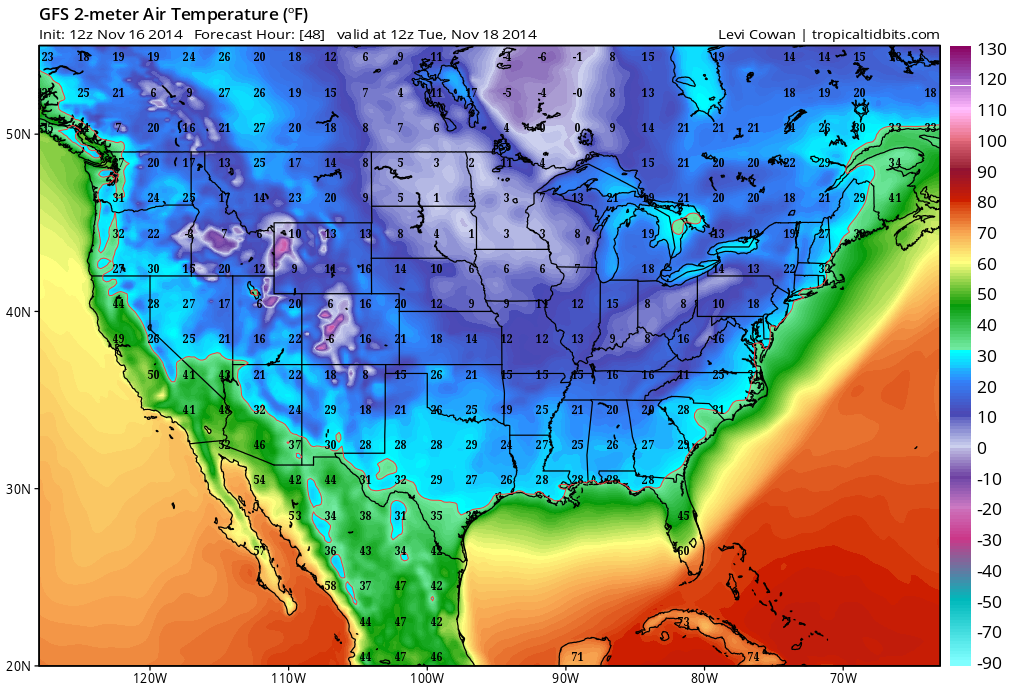 Below are the projected temperatures for Wednesday morning: 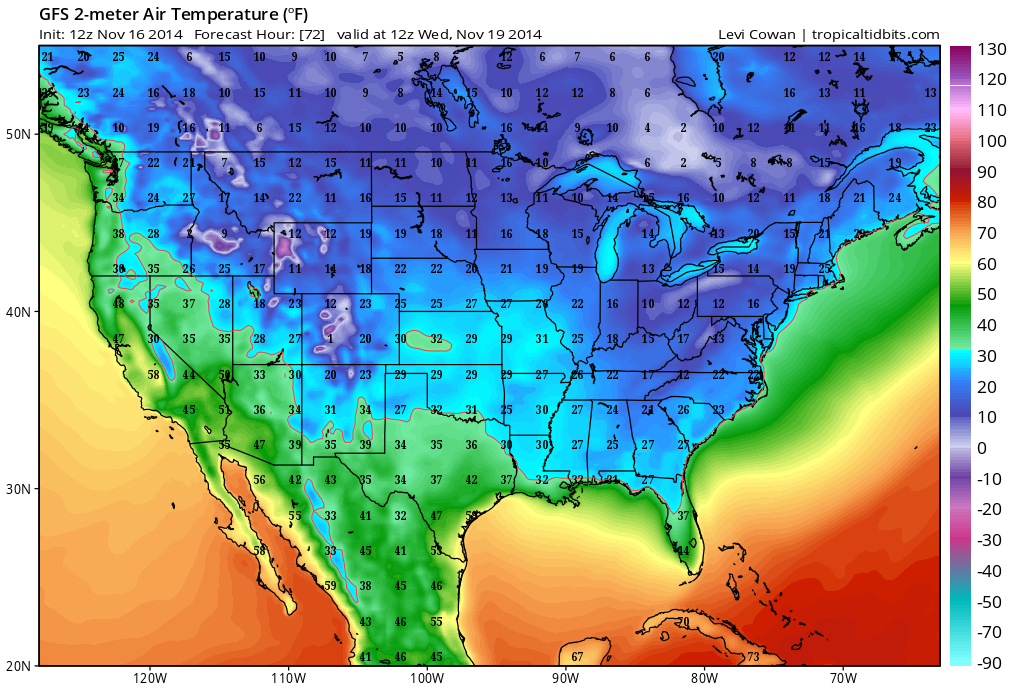 This is very unseasonably cold for this time of year, and this Arctic blast will definitely challenge or break records!

What To Expect With The Storm System Tonight and Early This Week:

Currently, areas from the Southern Plains and northeastward are getting moderate snowfall. This is behind a frontal system that has moved through, and this snow will increase in intensity for some regions and move out of other areas later tonight. This snow band could push further south into lower Oklahoma and Texas later today. A surface low pressure system is currently developing along the Gulf Coast and will strengthen as it moves northeastward tonight and tomorrow. As expected, this will bring heavy rainfall across the Southeast and up the East Coast.

Cold air will be rushing in behind this system, so some areas that are currently getting rainfall may see a quick transition to some wet snowfall tonight and into the early morning hours. I really wouldn’t be surprised if places across Arkansas and northern Mississippi get some snow before the moisture moves out of the region. If they’re lucky, even northern Louisiana and northwestern Alabama could see a few wet snowflakes. So if you’re in these regions, you might get a taste of what is to come later this winter. 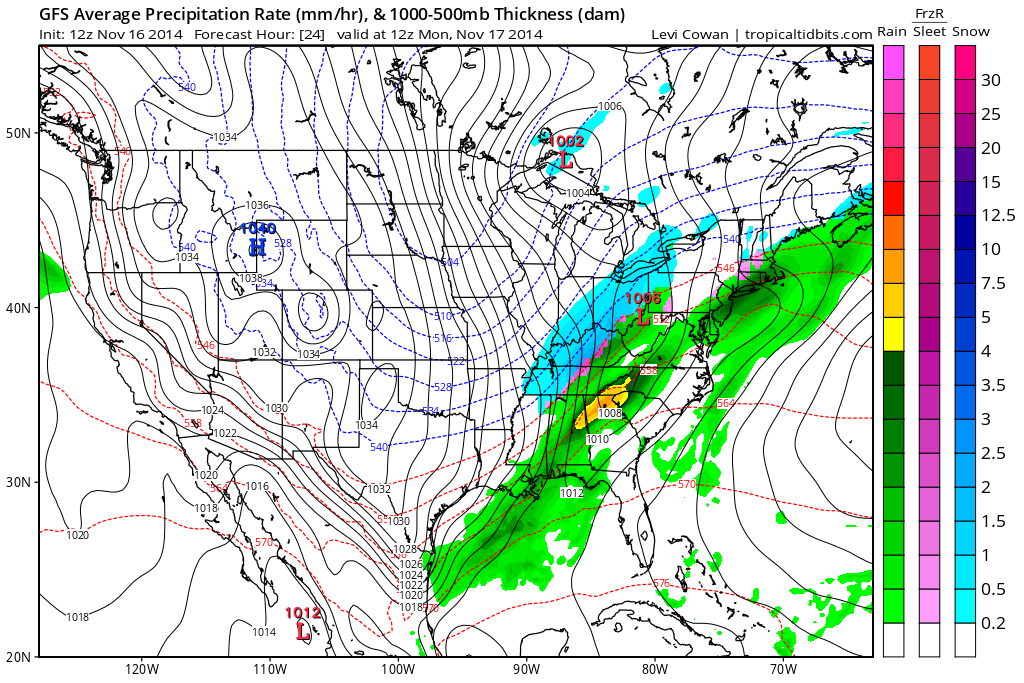 The disruptive snowfall event will occur further north across the Tennessee Valley, Ohio Valley, and inland Northeastern States. Many of you are already under winter weather advisories and winter storm warnings, and some of these advisories may have to be expanded eastward. This will be the first big snow event across these regions this season, and again, this will give you a taste of what is to come. If I need to put out an update on the site later tonight or tomorrow regarding this event, then I will.

One last thing that I want to mention is the severe weather and tornado threat expected along the Gulf coast states today and tonight. The airmass over that region is pretty unstable and could support the development of a few storms capable of producing a tornado or two. The tornado threat will shift further east along the Gulf coast states tomorrow.

I will eventually be putting out an article on the Thanksgiving storm threat once I have more details. Be sure to like the Facebook page for future updates and articles. I also update Twitter quite often, so be sure to follow Firsthand Weather on there also!