I’m going to keep tonight’s article fairly brief, but I wanted to take some time to talk about the coming cold next week and discuss some observations that I have made over the last few days. The pattern that we have setting up for next week looks eerily similar to what we saw back in January that brought brutal cold from the Great Lakes and Northeast down to the southern states. And let me just warn you, polar vortex will probably be brought into the spotlight once again. Just remember, the polar vortex was there way before the media ever became aware of it.

As I’ve mentioned on this site before, when you get blocking over the Arctic, cold air gets displaced over the mid-latitudes. We saw that happen last winter and during the summer, and we’ll see it happen again in a major way this winter. Last winter, the cold air was generally displaced over the central and eastern United States, while everywhere else was quite warm around the globe. We’re already seeing this pattern set back in, and you can see it clear as day showing up on the models. Despite some cooling in the central Pacific due to storminess, there still is a warm pool over the northeastern Pacific, which ended up being responsible for the brutal 2013-14 winter in the United States.

I have to be careful not to get too hung up on how the November pattern is setting up because what happens in November may not necessarily happen in December and beyond. But as I’ve explained since July, we are much more likely to have a winter similar to last year’s (possibly even colder in some places), and I’ve explained my reasoning in my earlier predictions. 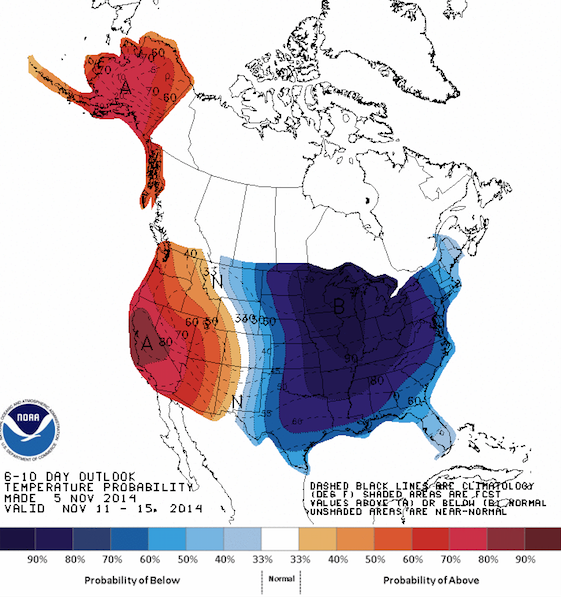 Probability of Below Average Temps in 6 to 10 Days

There’s one last thing that I want to mention before I briefly discuss the Arctic cold coming next week. I’ve already noticed where models are trying to develop ridging up across the western U.S. and up over Alaska. The jet stream even has a split flow look to it in the longer range, meaning there is a distinct sub-tropical jet stream across the South and a polar jet stream to the North. This is pretty common during El Nino winters, but in many cases, the polar jet stays further north bottling the cold air up over Canada and the Arctic and keeping it out of the states. In the case of this upcoming winter, you’re going to have a polar jet that brings brutal air into the central and eastern United States, while interacting with a very active sub-tropical jet stream across the South and up the East Coast. When you have this happen along with the very warm sea surface temperatures off the East Coast, you’d better watch out for a very snowy winter across those regions. That’s why I’m so bullish on the part of my forecast that is calling for copious amounts of snow for parts of the Southern Plains, Southeast and up the East Coast.

Now the cold that is coming next week could even be worse that what we experienced earlier this month for some areas. Like I mentioned, this pattern is very reminiscent of what happened back this past winter with very cold air over the Great Lakes and then eventually spreading southward all the way down to the Southern Plains to the Southeast and on up the East Coast. Places in the upper Midwest and near the Great Lakes may get their first big winter storm of the season next week, and I’ll have more on that in the coming days.

Next week’s cold will eventually overspread a large area of the United States by the middle to end of next week. The pattern looks very “blocky” over the Arctic, so this cold is not going anywhere fast once it gets here. Yes, there will still be swings in temperatures throughout the month, but looking at the overall big picture, we have a chance at several Arctic blasts this month. 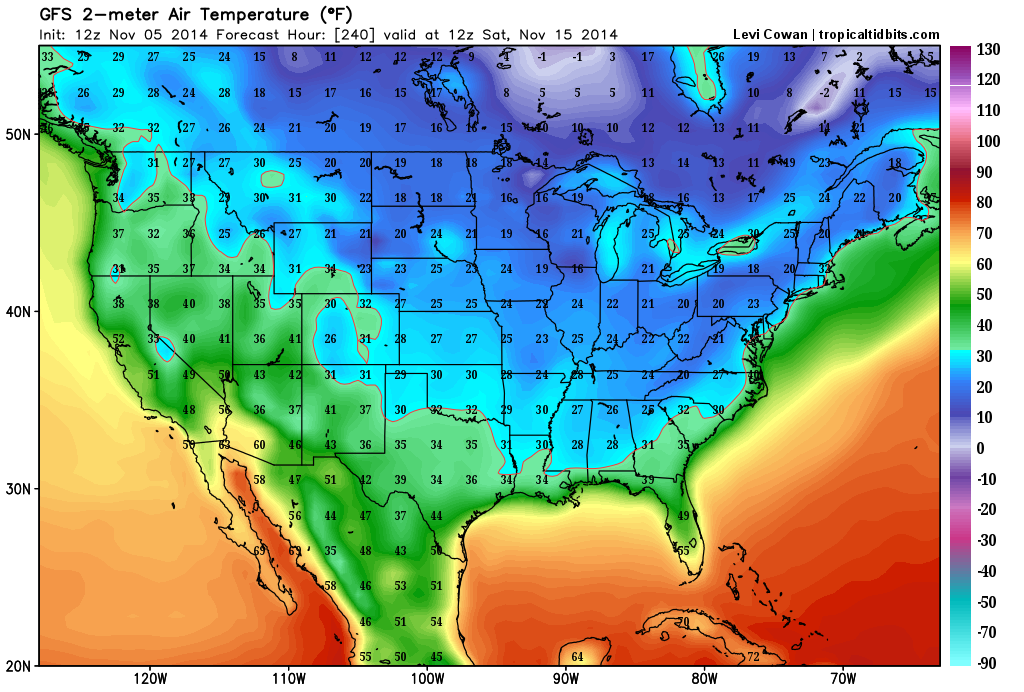 GFS Projected Temperatures for the End of Next Week

There’s one last thing I want to make note of that you’ll probably hear a lot about over the next few days. The typhoon over the western Pacific will eventually transition into an extratropical cyclone and may become strong enough to break a world record as it deepens over the Bering Sea. There’s just so much to watch!

You may have not understood all of everything that was discussed in this article, but that was the meteorologist in me coming out. We’re entering into a period that could be a phenomenal window for meteorologists and weather forecasters like myself to learn A LOT! This winter could be the winter that I have been waiting for since I was a kid. But always remember, one small variable can throw the entire forecast off.

That’s all I have for you tonight. Be sure to subscribe to my newsletter if you haven’t already by clicking here. I have a few more slots available. Be sure to like Firsthand Weather on Facebook to get my daily updates.