Update: Firsthand Weather’s final 2014-15 winter forecast will be released on November 2nd at 2 pm ET on this site.

This is a more simplified version of the preliminary 2014-15 winter forecast that I released on July 20th. In this post, I want to go region-by-region and tell you what I believe this winter entails for those areas. Before I do, please understand that this winter forecast is subject to change, but at this time, I am fairly confident in my current predictions for this upcoming winter. Only time will tell if my predictions verify, and if any changes need to be made, I will do so in my final winter forecast which will be coming out in October.

Two of the points that I made in my preliminary winter forecast was that the strength of the El Nino matters and the placement of the above-average sea surface temperatures across the equatorial Pacific matters. That’s why you can’t come out with one of those “this is your typical weak El Nino winter maps” and call it a winter forecast. It simply won’t work. Also, there are other factors that will be big drivers of this upcoming winter because we will likely only be in a weak to weakly moderate El Nino. The warmer waters in the northern Pacific over the Gulf of Alaska could again be partially responsible for another cold winter in the central and eastern United States, while the West has above-average temperatures.

If you didn’t see my preliminary 2014-15 winter forecast, be sure to take some time to read it later by clicking here. I go into detail as to why I’m predicting what I’m predicting, but just to warn you, it is quite lengthy! Right now, allow me to break down region-by-region what you can expect for this upcoming 2014-15 winter. 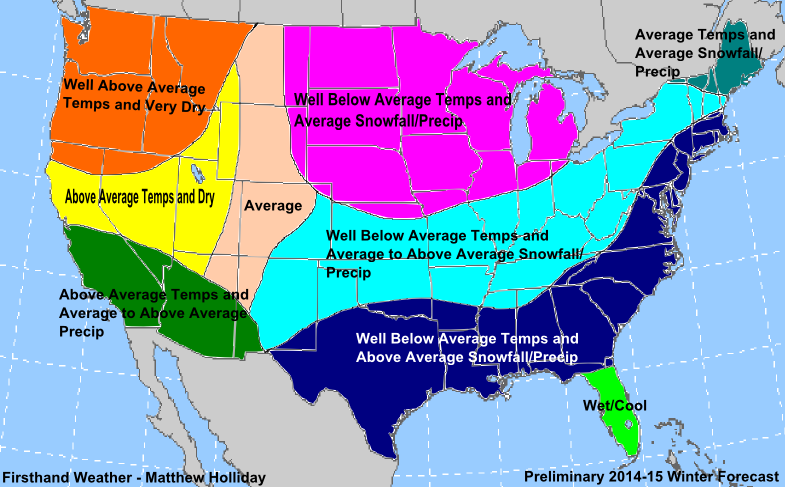 Southeast: The southeastern United States will likely experience well-below average temperatures with many areas across the Southeast getting plenty of snowfall/ice/rain. Last winter, many regions saw above-average snowfall, but that doesn’t always translate to a wetter-than-average winter. This winter across the Southeast will likely be wetter-than-average for most. Because of the cold air that will likely be in place, many regions that typically do not get snow and ice will get it this year. This reminds me of what occurred in 2009-10 when many people living in the Gulf coast states saw snow who hardly ever get it. Unlike last winter, Florida will likely get in on the really cold air this year since a lot of the cold air could be more focused in the eastern U.S. Expect several big storms to move across this region this winter and impact many living in this area.

Mid-Atlantic: The Mid-Atlantic could even see a snowier winter than last winter and likely experience well-below average temperatures. This winter could rival some of the “snowpocalyptic” winters that occurred a few years back, which will likely end up making this a highly discussed topic throughout the winter. This will likely be a wetter-than-average winter for the Mid-Atlantic, and this region will likely feel the effects of low pressure systems bombing off the East Coast. This area will probably be impacted by several storms this season and may even feel the effects of a pre-season storm that may try to develop.

Northeast and Great Lakes: A good portion of the Northeast will likely experience a colder-than-average winter, but it really depends on where you’re located. Places in the northern Northeast like Maine could actually have around average temperatures and snowfall, while regions more to the south and along the coast may feel the effects of heavier snowfall and brutally cold air. The Great Lakes region will be brutally cold; however lake-effect snowfall could be considerably less this year. This was hard for me to include on my winter map, which is why I wanted to mention it here. Waters on the lakes are still very cold from this past winter with chunks of ice that were still being spotted as late as this past July 4th. This will likely have an effect on the lake-effect snow machine this upcoming winter.

Southern Plains: The Southern Plains will also likely experience well-below average temperatures with higher-than-average snowfall/ice, and overall, most of this region will be wet, some areas more than others. This is another region that could have areas getting snowfall/ice that typically don’t get it. Several storms will likely track across this region throughout the winter with several places across Texas having a decent chance at getting some good snowfall this year. This region will be in the path of some of the Arctic blasts that will likely dive pretty far south this winter.

Northern Plains: The Northern Plains will likely be in a region that experiences brutally cold air diving south from the Arctic, but some areas will be impacted more than others, particularly eastern sections. Precipitation/snowfall could be around average, maybe even below average once you move more west. This is one of those regions that I’m a little more uncertain about and will have to watch closely as we get closer to winter.

Southwest: The Southwest may actually have a decent shot at getting some good rainfall/snowfall to help put a small dent in the drought this winter. While this region will likely have above-average temperatures overall, I’m feel pretty optimistic for the southern regions across California. The further north you get though, the drier things will get. If we do get a lot of storm systems moving through this region, that may bring the overall temperature averages down somewhat, but for now, I’m still calling for above-average temperatures.

Northwest: This region will likely be dealing with well-above average temperatures and once again, very dry conditions. This area will probably feel the effects of another winter that brings ridging over the region; therefore, warmer and drier conditions.

As I stated, some of this will change as we get closer to this winter, but for now, I think things look really good with the forecast overall. For those of you that do not follow Firsthand Weather on Facebook, you definitely want to like the page by clicking here. I will be putting MANY updates on there regarding this upcoming winter over the next several months.