February Could Bring Some Winter Surprises

In some ways, this has been a headache of a winter to forecast, but in other ways, what we have experienced hasn’t been too much of a surprise. This is why I stressed way back in July how this winter would be different than the 2013-14 winter but at the same time, very memorable. I think many of you are startting to see what I was talking about, especially if you’re located further north. There’s a reason that the southern U.S. has missed out on the frozen precip so far, but it really could have gone either way. It’s either been very cold and dry or warmer and wet. That’s the price you pay with the more volatile pattern like we’ve had. We could have easily had two, maybe three, winter storms behind us by now, but it just swung the other way. If you like snow and are located further south, you can consider yourself very unlucky so far.

Basically we are a nation divided. If you’re in the Upper Midwest and particularly New England, you’re ready for spring (at least I would think). The worst is yet to come for that region, and additional snow will fall this week. I’ll discuss all of that in a minute. By the time this winter is over, this could end up being one for the record books (as far as snow and cold goes) for New England. I know that many of you up there just call it winter, but it has been unusually cold and snowy. That trend is going to continue. 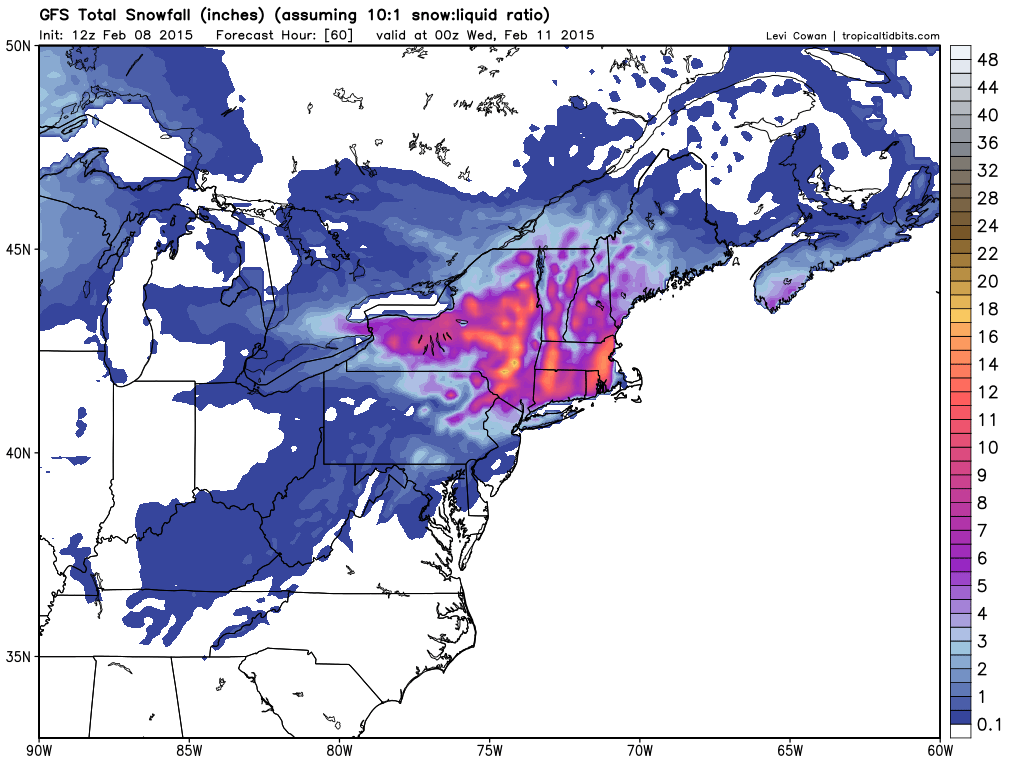 From the Southern and Central Plains, Southeast, Tennessee Valley, and Mid-Altantic, those areas have dodged the worst of winter so far. Typically, February is the big winter month for many of these locations, so this winter could still bring a surprise or two. I wouldn’t be entirely shocked if something big in March happened also. We’ll talk about that when we get to it.

The West Coast has been extremely wet with the exception of southern California. To my surprise, that is the region that has missed most of the rainfall/snowfall this winter, and it has fallen further north. From central/northern California and northward has been getting hit hard with the heavy rainfall. You can thank the “atmospheric river” for that deep-layer moisture feed from the tropics.

Now that I’ve hit the high points, lets discuss the Arctic blast that is on the way.

After a very warm weekend across much of the central and eastern U.S. (with the exception of New England), temperatures are going to plummet by the end of this upcoming week. The core of the cold is going to remain over New England, where I could see temperature records easily challenged or broken later this month, but the severe cold will eventually begin to push southward, particularly in the eastern third of the nation (east of the Mississippi). As the month progresses, these Arctic blasts could be a bit more widespread and include a large chunk of the nation east of the Rockies.

The Climate Prediction Center is very convinced that the core of the cold will be east of the Mississippi, and I agree. Despite the Arctic Oscillation (AO) and North Atlantic Oscillation (NAO) in the positive range, the cold blasts are still going to take place. This just confirms what I said back several articles ago that the Pacific is once again a big driver of this winter. I will admit that I am surprised that the AO has remained so positive this winter, given the high Siberian snow cover in October. That will be something for me to go back and study in the future to understand why this flip didn’t occur (or hasn’t occurred so far). 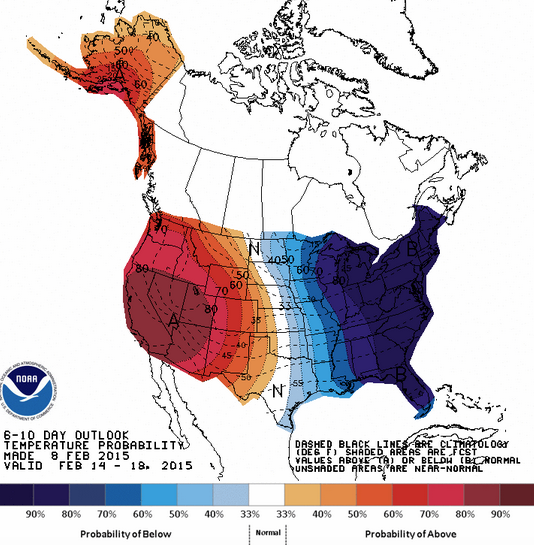 Despite the lack of blocking over Greenland and the Arctic, there will be ridging building up over the Atlantic and a ridge will eventually begin to pump up even further over the West Coast and Alaska. The western United States has already been very warm this winter (as expected), and that trend will likely continue. The big question in my mind right now is will this cold actually lock in. If you were to ask my honest opinion, I’d tell you that there could be several Arctic blasts this month, but there could be some thaw periods in between with more persistent cold from the Upper Midwest to New England. 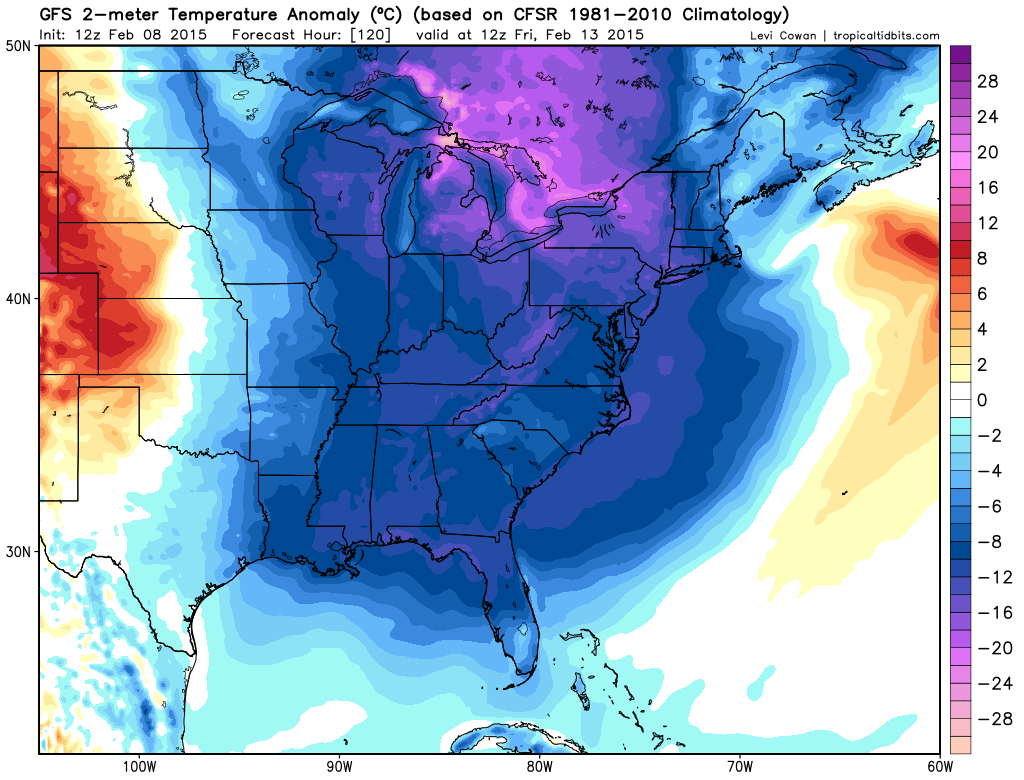 This is how below average the GFS model is projecting the temperatures to be late this week.

Will The Southern U.S. and Mid-Atlantic Finally Get Some Snow?

I’m still on the fence about this, partially because we’ve had so many close calls this winter where many regions have been just a few degrees from having a major snow/ice storm. Given these weaker El Nino Modoki-type winters, the month of February is almost always the big month for the southern regions. In general (El Nino or not), the month of February typically brings most of the southern snow/ice storms. Even as severely cold as last winter was, that’s even what occurred then. So, climatology is at least on your side.

At least there will be some opportunities coming up in the future. These pieces of energy that break off in the Pacific are going to try to push in from the southwest and eventually up into the southern United States. A lot of the model guidance has a feature or two sitting over Baja California and eventually they try to come east. In fact, a lot of the models have been hinting at something around mid-month, and if it’s going to happen, I’d say it would be around the 15th or a few days after. The cold air SHOULD be in place, but given what has been happening all winter, the cold air is here, it leaves, a storm system moves in, and then the cold air comes behind it 12 hours later. These pieces of energy will eventually move eastward, but it has to happen at the right time.

If you like snow and ice, there could be some fun to look forward to, but you know as well as I do, there are quite a few things that can mess everything up. At least we have something to work with, and I have a strong hunch that regions from the Southern Plains through the Southeast and maybe even the Mid-Atlantic will get the one winter storm they’ve been hoping to get this entire season.