We have finally arrived at the best time of the year! I am beyond thrilled that you have decided to check out this final winter forecast, and my goal is to prepare you for what is to come. There are a lot of variables at play that could influence this upcoming winter, and while I have consistently been predicting another brutal winter across a large portion of the United States since July, putting this forecast together has been a challenge. One must understand that missing one tiny variable can throw off an entire forecast, and given that the ocean/atmosphere connection is so complex, accurately predicting the winter is difficult for even the most experienced weather forecasters.

I have laid out this year’s final winter forecast a little differently than I have in the past. I am going to be giving you a brief overview of what is currently taking place, which will lead me into discussing how that will affect this winter. I will be providing you with three maps: a temperature map, a precipitation map, and the overall winter forecast. This forecast is specifically for a 3-month period ranging from December 1st to February 28th, which is the meteorological winter. In addition to this final winter forecast, I will be providing you with a monthly outlook for each month of the meteorological winter that will be released two weeks before each month begins. For example, my monthly forecast for December will be coming out in mid-November. The reason that I’ll be doing this is because I want you to have a clear picture as to what to expect for each individual month. Winter forecasts are great, but there is a lot that can happen within a 3-month period that is difficult to fully represent in one big forecast.

The 2014-15 U.S. winter is shaping up to be another brutal winter with heavy snows and bitter cold for the central and eastern United States. I don’t like saying that this winter will be a repeat of last winter because we have some other variables at play, but in a lot of ways, there could be many similarities.

The warm pool that is over the northern Pacific is still there although it is not nearly as warm as it was earlier this year. That is likely due to an increase in storminess over that region, but I am not overly concerned about that impacting the overall forecast in the states. Warm waters still persist from the northeastern Pacific all the way down the West Coast of the U.S. The northern central Pacific has experienced some cooling, and cooler than average water temperatures are very evident in and around Japan. All of this can favor a colder than average winter in the eastern United States with an increase in storminess. The reason that I mentioned this first is that there has been a much higher focus on the northern Pacific this year because of how it was a main driver of the last U.S. winter. It will once again play a role, but I do not foresee that being the only main driver.

We still do not have an El Nino in place, but latest model guidance still suggests that we will at least be moving into a weak to low-end moderate El Nino by the time we’re full-swing into winter. I am still leaning towards there being a weak El Nino with the focus of higher sea surface temperatures being over the central equatorial Pacific. Because I am expecting this El Nino to stay on the weaker end and the area of highest sea surface temperatures to be over the central equatorial Pacific, this will influence the winter in a much different way than a traditional El Nino winter setup. El Nino will be a driver this winter, but it will not be the only driver. I do expect a very active subtropical jet this winter which will bring heavy rains and mountains snows to California, and an overall increase in storminess over the southern states and up the East Coast. With the colder winter that I am expecting in the eastern United States, you can expect numerous East Coast winter storms this season.

During October, there was a rapid increase in snow cover over Siberia. A rapid increase in snow cover in October over Siberia can prompt a negative Arctic Oscillation winter. When the Arctic oscillation is in its negative phase, brutally cold air is often displaced and pushed over the central and eastern United States, and the storm track is typically much further south. With the active subtropical jet likely setting up across the South due to El Nino and the polar jet stream likely being pushing further south into the eastern United States due to a negative AO, I expect this to be an active and stormy winter for those regions. I have mentioned since July that I thought places that typically do not get snow and ice will be getting it this winter, and I have not changed my mind on that.

There were numerous other factors that I considered when putting together this winter forecast, but in order to keep this forecast reasonably short, I am not going to go into much detail on that. Later this month, I plan on putting out a winter forecast geared more towards the meteorological and scientific community. 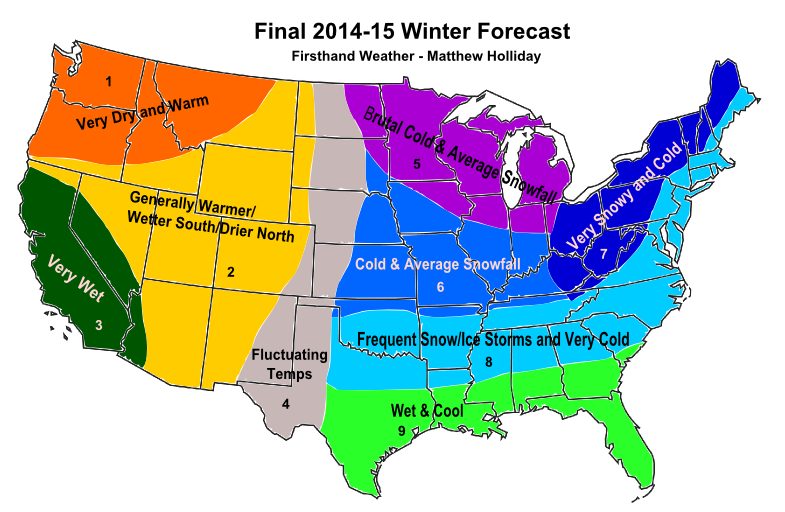 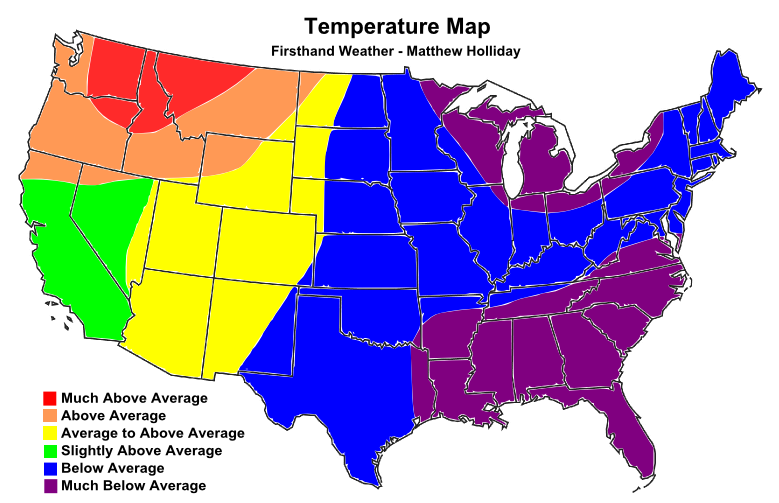 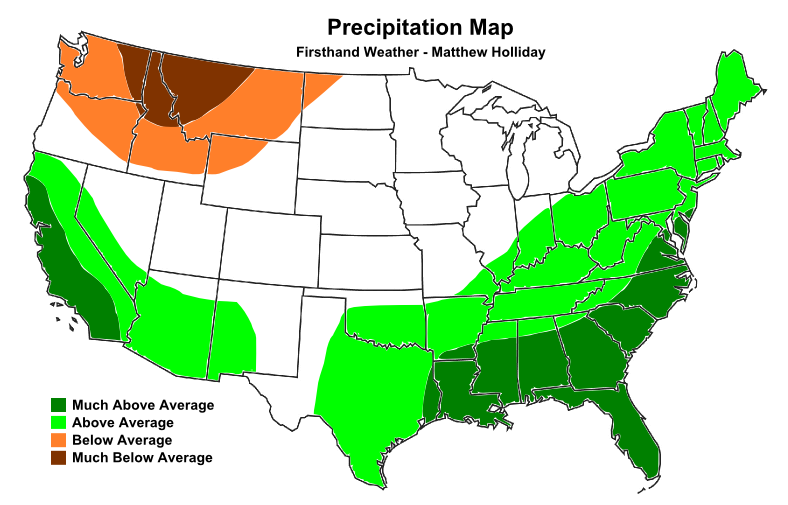 Region 1: Over the last several weeks, the Pacific Northwest has received copious amounts of rainfall, and while the rainy trend may continue for several more weeks, this area should eventually dry out. With the warmer sea surface temperatures still just off the coast, I expect ridging to eventually develop over this region, and overall, bring a warmer and drier than average winter season. Depending on how quickly that ridge begins to build will determine how quickly everything starts to dry out.

Region 2: This region will generally be warmer than average. Most of the Rockies will likely have average to below average snowfall because of the ridging that will likely build over this area. The more southern regions will be the most likely areas to receive some decent precipitation, while the more northern regions will be drier. Since I am expecting an active sub-tropical ridge further south, this should increase rainfall/snowfall amounts across the southern areas.

Region 3: This winter for California is looking good! Over this region, I expect conditions to be very wet especially as we move further into winter. Heavy precipitation throughout the winter could bring overall temperatures down, which is why I put this region in only a slightly above average temperature zone. I decided to extend the above average precipitation zone over all of California since latest trends seem to favor more precipitation further north. While this forecast sounds promising for California, too much rain and snowfall isn’t necessarily a good thing. I wouldn’t be surprised if mudslides became more common over the region this winter.

Region 4: This is the region that could vary throughout the winter. With the expected warmer than average temps out West and colder than average temps out East, you typically have an “in-between” zone like this where the overall outcome of the winter could really go either way. In my temperature map, I put parts of the southern regions in the below-averge zone and some of the northern areas in the above-average zone. That’s mainly because the more southern regions could be wetter, which would likely bring overall temperatures down.

Region 5: I expect another brutal winter across this region with decent snowfall. Last year, this particular region experienced a brutally cold winter with high amounts of snowfall. This region was hit hard because of the weakening of the polar vortex that displaced bitterly cold air over this area. Because I expect the polar jet stream to dive deep into the United States this winter, this would be an area that would likely experience the brunt of the cold. Typically, El Nino winters favor temperatures to be warmer than average over this region, but given that this will be a weak and Modoki-style El Nino setup, I expect the overall pattern to favor colder temperatures. Places like Chicago should expect some big snowfalls throughout the winter.

Region 6: This region will be another area that has to deal with another cold winter similar to last year. Residents in this region should expect frequent blasts of cold air and will also receive decent amounts of snowfall. Eastern parts of this zone may be in a wetter pattern more so than the western zone, but I do expect even the western regions to get decent snowfall throughout the winter.

Region 7: This region can expect frequent Arctic outbreaks and high amounts of snowfall. This upcoming winter is shaping up to be very similar to last winter, especially in regards to the cold. Places from Ohio on up to the Northeast need to brace for what could be a very costly and nasty winter and could result in prolonged periods of brutal cold and snow.

Region 8: This region is the area that I am most concerned about for this upcoming winter. We have a situation where the pattern is going to favor a lot of precipitation due to El Nino and a very cold pattern due to warmer waters in the northeastern Pacific and much higher than average Siberian snow cover, which will likely be responsible for a negative Arctic Oscillation. If all of this comes together, this region could have a winter that they have not experienced in decades. I put most of this region in much-below average temperatures and much-above average precipitation. Places that typically do not get snow and ice will get it, and places that typically only get small amounts of wintry precipitation will get a lot. I expect a very active and wet pattern across the southern states, and I expect the polar jet and the southern jet to interact in a way that could bring about a “snowmageddon” kind of winter along the East Coast. I expect numerous East Coast and Southeast winter storms. Places even as far west as the Southern Plains including Dallas will also likely be hit hard.

Region 9: This region will also experience much below-average temperatures and very wet conditions. Given the expected cold over this region, there could definitely be several winter events along the southern Gulf coast states, which could also include the panhandle of Florida. Florida will likely be wet the entire winter and can expect records to either challenge or break during the coldest periods of the winter. This region could also likely experience a winter that they have not experienced in several decades.

Region 10: Although it is not included on my map, I did want to briefly mention Alaska. I expect ridging to eventually begin building over Alaska, which will bring the state above-average temperatures. Forecast models actually are starting to pick up on a ridge developing over most of the state, and while it may take several weeks, I do expect this eventually to happen.

You can sign up for my newsletter by clicking here! There are only a limited number of slots open (over 3,000 of the 5,000 slots are already taken). Beginning this winter, I will be sending out a weekly newsletter that you DON’T want to miss. Also if your signup, you may be chosen to try out the Firsthand Weather mobile app before it is released, which will be coming out in 2015.

I hope that you enjoyed this breakdown of the final 2014-15 winter forecast. If there is anything that you felt was not clearly explained in this forecast, please let me know in the comments so I can correct it! To read my early winter forecast that was released in July, click here.