The Forecast calls for Strong the severe thunderstorms continue across Texas though the Severe Thunderstorm watch that was in effect over night has now expired.  Another round of severe weather is expected today. 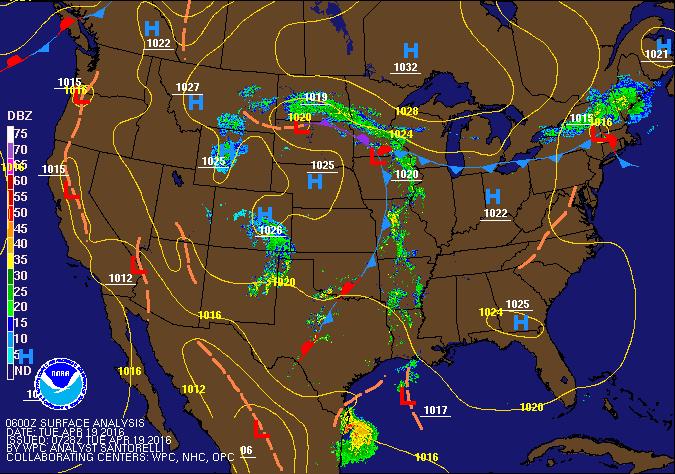 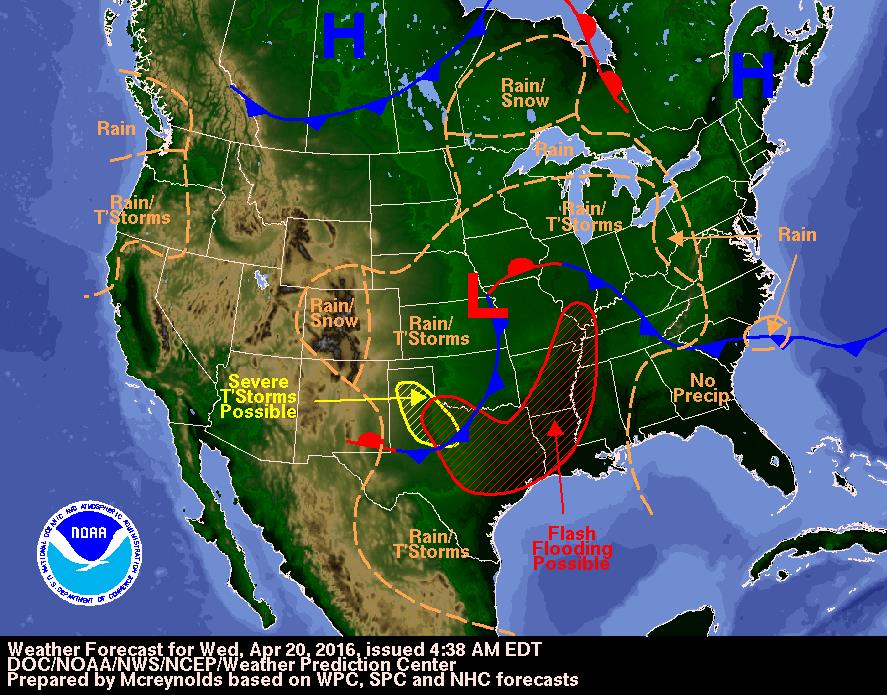 The system that brought widespread heavy precipitation flooding to portions of the southern and central plains will slowly track to the east through the end of the week. Showers and thunderstorms will persist for much of the southern/central plains and portions of the western Gulf Coast today before expanding into the Midwest and Upper Midwest by tonight into the Ohio and Tennessee Valleys on Thursday. Some of the storms that develop in northern Texas could become severe. The Storm Prediction Center has issued a slight risk for portions of the Texas today. Locally heavy rain will be also possible, which may result in flash flooding for some areas. An excessive rainfall outlook have been issued for portions of the southern plains and the Lower Mississippi Valley today. 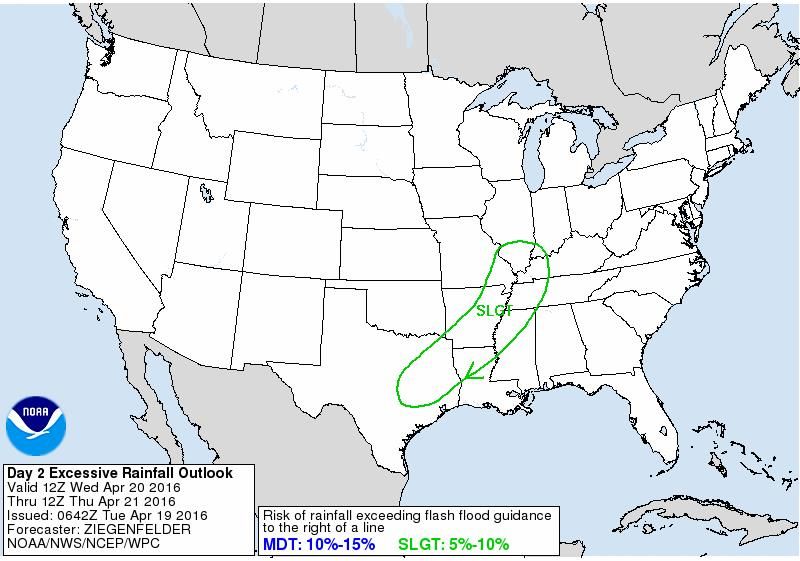 Warm conditions will continue for most of the Northeast and Mid-Atlantic states. Showers and thunderstorms will begin to spread into the region by Thursday afternoon/evening ahead of the advancing system. Most of eastern third of the CONUS will have widespread precipitation by Friday morning.

A vast portion of the West will also remain relatively dry with well-above normal temperatures. High pressure at the mid and upper-levels of the atmosphere will help to keep coverage of precipitation scattered, and will also keep high temperatures 10 to 25 degrees above average today and Thursday. More widespread showers are forecast to begin spreading into the coastal Northwest by late Thursday as a Pacific frontal boundary approaches. Snow is forecast for Sierras – highest elevations could have snow accumulations near 10 inches. 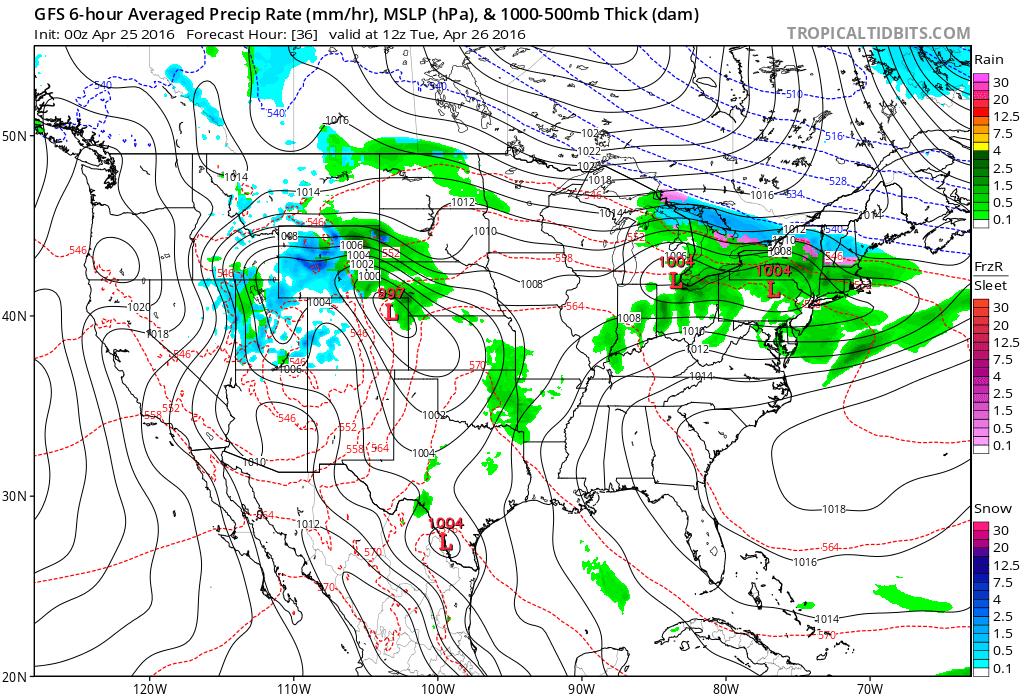 Rain in the Houston area will have ended for this morning but heavy rains outside the Dallas region will continue to exacerbate conditions there. Those heavy rains will extend up into Oklahoma and Kansas with some lighter rain into Missouri and Nebraska this morning.

Mountain snow will continue in the Rockies though warmer temperatures may turn some of that precipitation to rain, especially near Western Wyoming and Eastern Utah.

Some rain showers will prevail over Northern California and Southern Oregon as a weak and relatively dry low pressure system moves over the Pacific Northwest but the Southwest looks to remain dry.

In the Northeast, rain and snow showers begin the day while the rest of the East Coast looks dry. 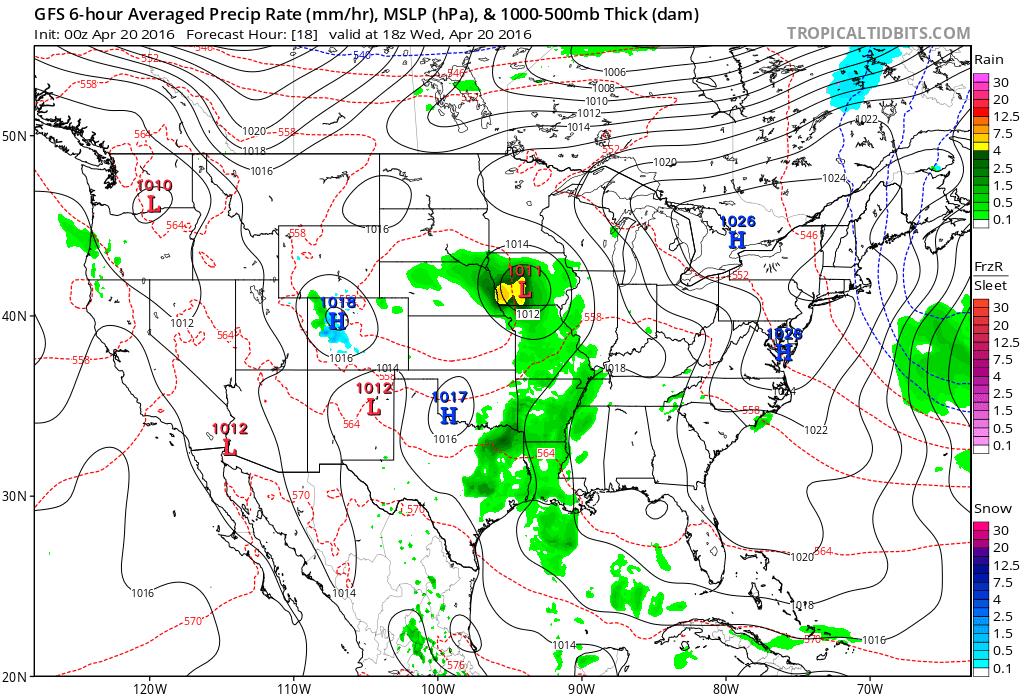 By Wednesday afternoon, the heaviest rain will be near the Dallas area as rain moves back into the Houston area. Rain will extend from New Orleans up along the Mississippi River toward the Iowa Minnesota border. 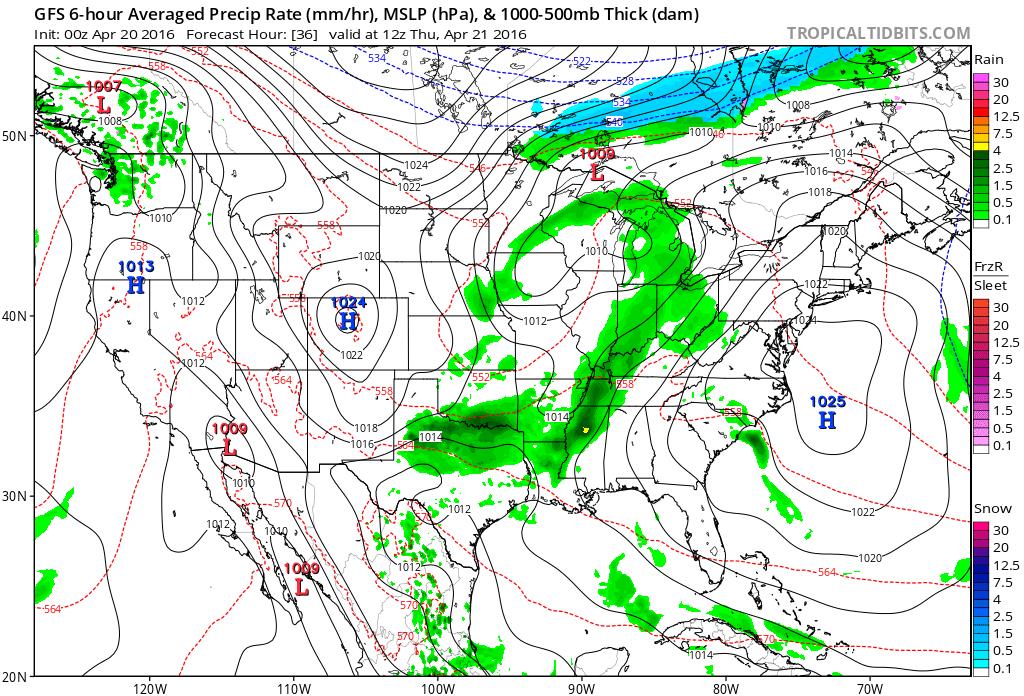 By early Thursday, the system in the Plains, wrapping up over Wisconsin, continues to bring heavy rain and severe weather to the Plains while the snow in the Rockies finally winds down as high pressure develops.  The Coastlines remain clear and dry under the influence of high pressure with only a break away batch of showers moving through the Northwest. 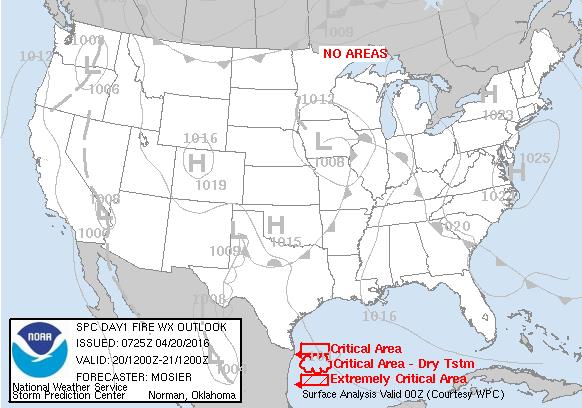 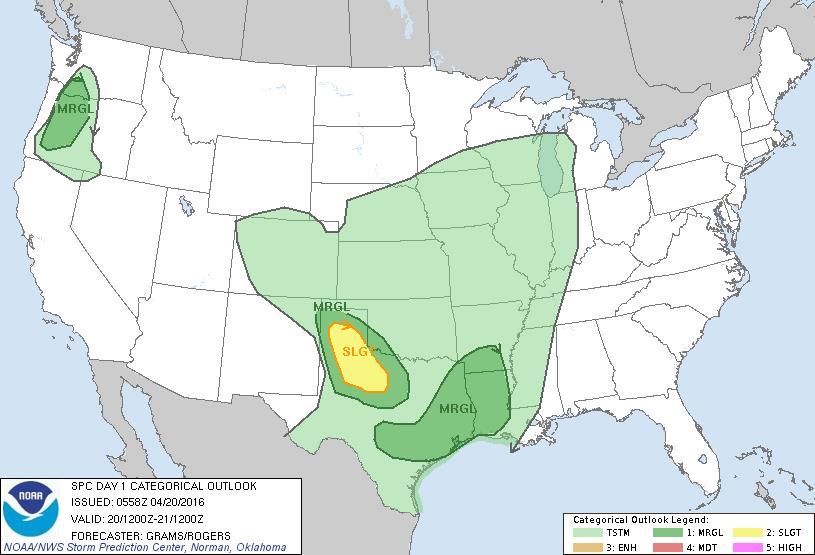 A threat for isolated strong to severe thunderstorms may develop across parts of Texas, the ArkLaTex region and in the Pacific Northwest during the afternoon and evening.

For Northwest Texas, meteorological conditions remain in place for another round of late day supercells forming into a mesoscale convective system(MCS) slightly further north than Tuesday’s storms. Diurnal destabilization will occur along the edge of a moisture plume over the Planes from the Panhandle to Souther Plains of West Texas.  Convergence along the Dryline should increase during the late afternoon as vorticity moves through Kansas.  Isolated convection should form over the Panhandle and head southeast as it forms the MCS with the risk for hail and severe winds lasting into the overnight hours.

The risk in Eastern Texas into Louisiana and Arkansas is due to the current MCS which is slowly beginning to decay. Current strong to severe thunderstorms will weaken as the morning progresses but scattered convection will remain through the day along the outflow boundary.  Dewpoints in the upper 60s mean we have very moist air ahead of the boundary which could aid in development but the favorable mid-level flow remains over the Ozark Plateau.  While severe storms could develop, the set up appears marginal for wind and hail.

In the Pacific Northwest, a weakening shortwave trough will have a confined belt of southerly winds that overspreads the Cascades during the hours of peak heating. Despite weak buoyancy rates, steep lapse rates should support an isolated severe hail and wind risk. 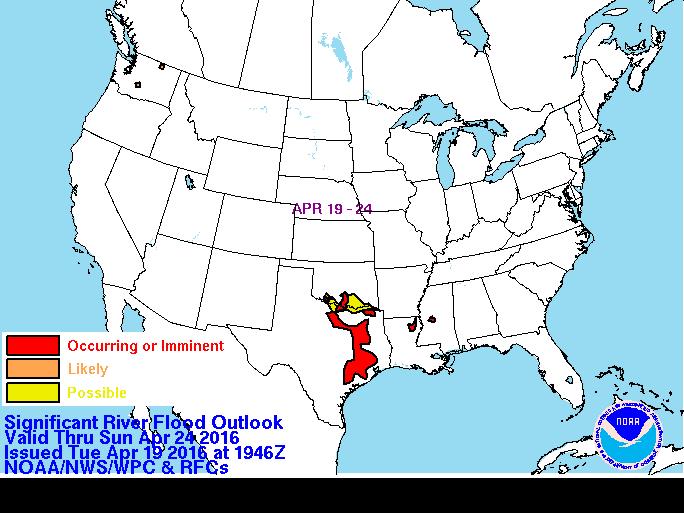 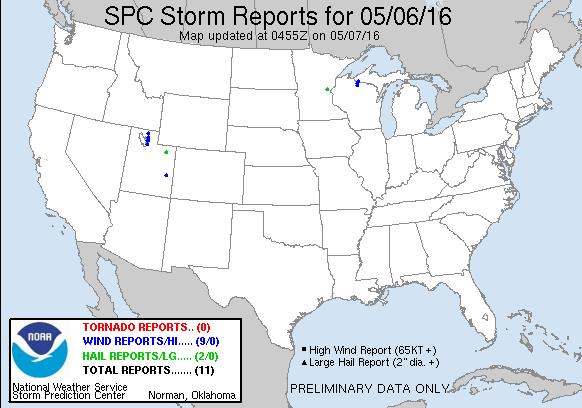