We’ve been talking about for days now in our discussions how there was a very good possibility that Hermine was going to slow down significantly or even stall as it moved off the East Coast and towards the Mid-Atlantic region. A trough, located over the Northeast states, is quickly moving out and will be replaced by a building ridge from the west. This ridging already extends up through the Great Lakes into central Canada, which will build eastward with time into the Northeast and eastern Canada, and in fact, ridging will encompass basically the eastern half of the nation by early next week.

This becomes problematic with the current situation at hand with Hermine, as she moves up the coast. Currently her forward speed is 20 mph northeast, which indicates that the trough is having an influence on the steering of the system. However, like we discussed the other night, the trough is going to likely pull out too quickly, and since it did not dig far enough southward, Hermine is going to get stuck off the Mid-Atlantic coast.

Hermine has weakened quite a bit over land, but she will be moving back over open waters shortly. Sea surface temperatures along the East Coast are well above average and fully capable of supporting a tropical system off the Mid-Atlantic coast. It is very possible that Hermine could regain hurricane status off the Mid-Atlantic coast, if it remains purely tropical in nature.

Regions along the Mid-Atlantic coast need to prepare for a high-impact event with strong winds, flooding, beach erosion, and high surf starting this weekend that will potentially extend into next week. Tropical Storm warnings now include all of the Virginia coast, the Delmarva coastal regions, and the New Jersey coast. Tropical storm watches extend up through the Connecticut coast, which includes New York City.

Weekend Projection Of Hermine Off Mid-Atlantic Coast (these are winds right above the surface): 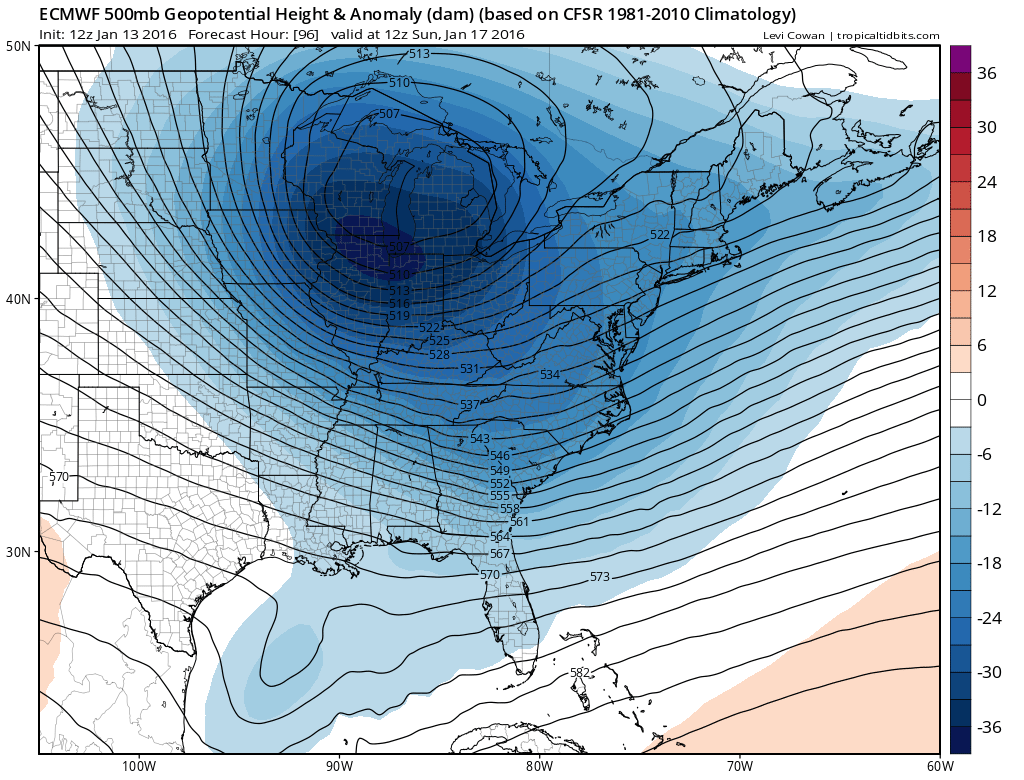 As we have mentioned, it is possible that this system could make a northwest jog towards the coast, even if the center of circulation never makes it onshore. Also keep in mind that this system will likely eventually make an extra-tropical transition or it may make the transition and then go back to a fully tropical state if it stays over sufficiently warm waters for an extended period of time. If this transition occurs, the wind field could become farther spread out from the center and impact regions even farther inland.

Heavy amounts of rain will fall along coastal regions, with the gradient being pretty tight. Even small variations in track could be the difference between coastal areas getting a few inches of rain versus well over a foot. Please keep that in mind.

We will continue to monitor this situation very closely. Please start making preparations now if you haven’t done so already.