Hermine Expected To Be A Hurricane By Landfall Tonight

Tropical Hermine has maximum sustained winds of 65 mph as of 11 pm ET, which is considered to be a strong tropical storm. This makes it about 9 mph short of being a hurricane, but with additional organization/strengthening expected, it should reach category 1 hurricane status or be very close by tonight.

Deep convection (storms) are now starting to wrap around most of the center of circulation, even extending along the northwest periphery of the center. This system is still a bit lop-side with most of the convection on the east and northeast sides of Hermine but still continues to look better organized.

The HRRR model, which is a short-range model, predicts that Hermine will have a surface pressure of 983 millibars by late tonight as she makes landfall. This would put Hermine within category 1 hurricane range. 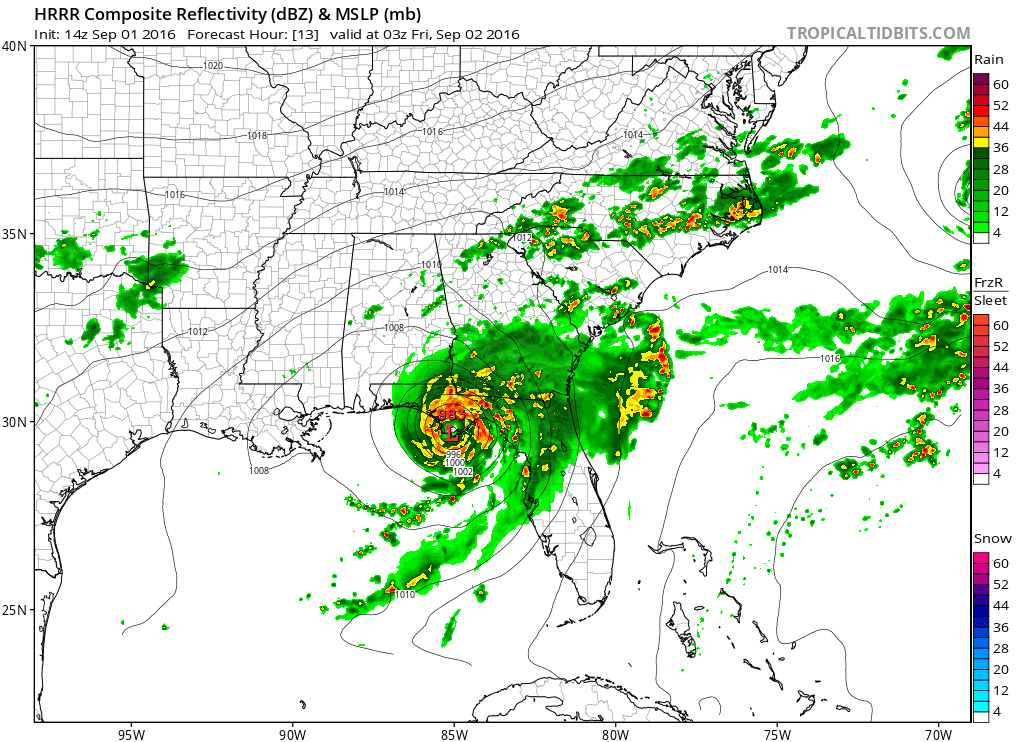 Landfall is expected to generally be near Apalachicola, FL tonight. These are the latest spaghetti plots with a fairly strong consensus on track over the next 48 hours. 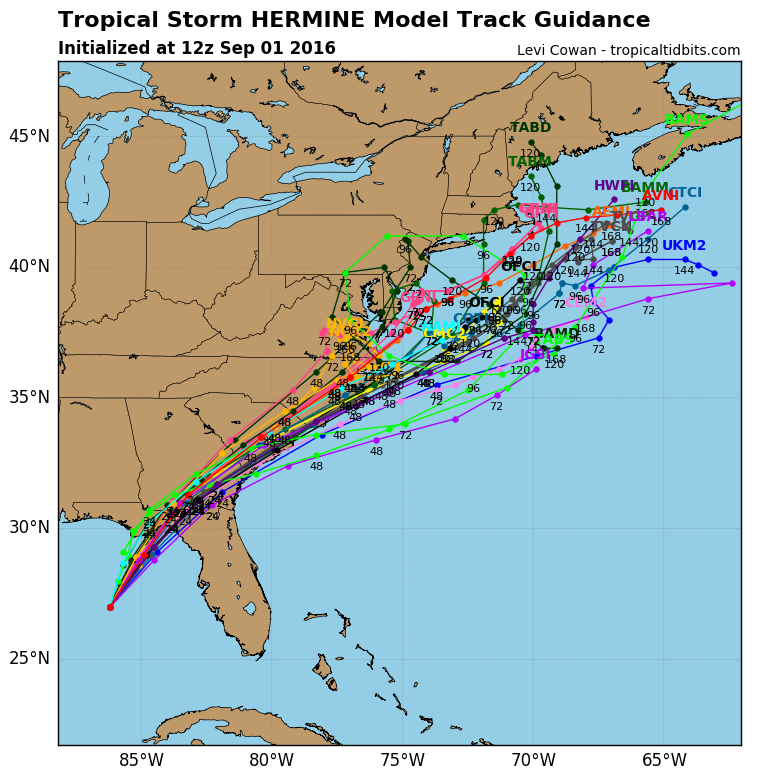 Excessive rainfall amounts will fall from parts of the panhandle of Florida and in general over the northern half of the state. Southern/south-central/southeastern parts of Georgia, the midlands and coastal regions of South Carolina, the eastern third of North Carolina, and southeastern Virginia should expect rainfall amounts on the order of 8 to 10 + inches with some locations easily getting over a foot of rain. Outer bands will reach areas outside of this zone also, dumping heavy rain farther northwest of the zone mentioned, although totals shouldn’t be quite as high. Keep in mind that a frontal boundary is pushing southward across the Gulf Coast states, which could enhance rainfall amounts.

Hurricane force winds can be expected across parts of the Florida panhandle and possibly into southern Georgia tonight into the early morning hours. Due to a favorable upper-level environment, Hermine may not weaken as quickly over land as it otherwise would, so expect tropical storm force winds to be felt across southern/southeastern/south-central Georgia, coastal South Carolina and just inland and even into parts of the coastal North Carolina region by late Friday/early Saturday. This is why tropical storm warnings have been issued for the northeast Florida coast, the entire Georgia coast, the entire South Carolina coast and along southern regions of the North Carolina coast.

Please refer to my article from last night to read my discussion on what Hermine could do after it comes northeast. A blocking ridge is going to develop and could dramatically slow down this system. Areas in the Mid-Atlantic (especially on the coast) need to watch this system closely, in case it does hug the coast. You can read last night’s discussion by clicking here. We will continue to post updates throughout the day across our social media pages and on the site. Please continue to make preparations for Hermine.