November has been a fun month, but I’m ready for something new. As I mentioned on the Facebook page last night, most of you should have been prepared for this East Coast winter storm potential about two to three weeks ago if you have been following my forecasts, but I will admit that nailing down the specifics of this storm has been challenging. For those of you who have followed my forecasts for a while (particularly last winter), you already know that what I typically do is try to give you an early heads up on a potential storm or pattern change, and while I cover the specifics of a storm once it actually happens, it’s hard for me to put out very localized snowfall/rainfall maps since I’m currently running Firsthand Weather by myself. You can get pretty decent short-term forecasts from a lot of places, but what you can’t get are decent medium and long-range forecasts. That’s where I come in.

Before I talk about the Thanksgiving storm, I want to go ahead and give you an early heads up about a pattern change that will likely bring a large portion of the United States above average temperatures in early December after this next cold push. I want to make two special notes: this is only going to be a temporary warm-up, and we will be flipping back cold across the central and eastern United States later in December. This isn’t going to be some long-term warm-up like some of the long-range models have been projecting, and I expect the forecast models to begin to paint a colder picture after we get past this brief warm-up. One last thing to remember is that November was incredibly cold for most, so what may seem warmer is actually just a little bit above average. Nonetheless, warmer temperatures are coming for the central and eastern United States, so enjoy them because we have a brutal winter ahead.

I wrote an article on Sunday that went into the meteorology behind what was going on, so in this article, I want to give you the details on what to actually expect from this storm. As I’ve already mentioned countless times, this is going to be a hugely disruptive storm for the Mid-Atlantic and Northeast on Wednesday going into Thursday, particularly for inland regions. Areas from northern Virginia through eastern Pennsylvania and inland regions across the Northeast will be getting the highest snowfall accumulations. Some of those areas could get anywhere from around 3 to 6 inches all the way up to a foot of snow or more. Adequate cold air will be available to support an all-snow event for those regions, and the snow to rain rations should be about 10 to 1, maybe even 12 to 1. That basically means for every 1 inch of liquid precip, you get about 10 inches of snow.

Areas closer to the coast, such as Washington, D.C. and New York City, are located in the zone that has been more complicated to forecast, and it has really come down to how much cold air will be available. There are two things that could lower overall totals for those located in these regions: many across this area may start out as rain and change over to snow and the overall snow ratios will be lower. Determining where exactly this snow/rain line will setup has been very tricky and will basically determine who gets pounded and who doesn’t. Most model guidance has come into agreement that these cities will not be the hardest hit but will get some decent snowfall accumulations. Just take note that this is a highly volatile storm, and anything could change even this close.

Places like Boston need to watch this as well since this is another city that is located on the borderline zone. Right now, it looks like the heaviest snowfall accumulations will be just west of the city, but regardless, things need to be watched. Areas across eastern Maine including the coast will likely get hammered with very heavy snowfall. I wouldn’t be surprised if some of those areas got well over a foot of snow.

This is the fun part about these types of storms because despite model agreement, you can still get those last minute surprises. Tomorrow is just not a good day to be traveling up the coast!

The North Carolina mountains could also get some accumulating snowfall with this system, but it’s going to be hard for areas outside of the mountains in the Southeast to get any measurable snowfall. However, as this storm strengthens and moves up the coast, there could be a transition to some wet snowfall outside of the mountains as temperatures fall across the non-mountainous regions. It’ll be interesting to watch, but it’s nothing that I expect to be hugely disruptive.

Below are the projected snowfall accumulations from the 12z NAM. Please note that snowfall totals are likely overdone along the coastal regions. Remember as I mentioned above that snowfall ratios may be lower than 10:1 closer to the coast, and this map is based on a 10:1 ratio. Also this has a difficult time taking into account any mixture or changeover of precipitation. Nonetheless, this should give you an idea as to where the heavy snows will most likely fall. 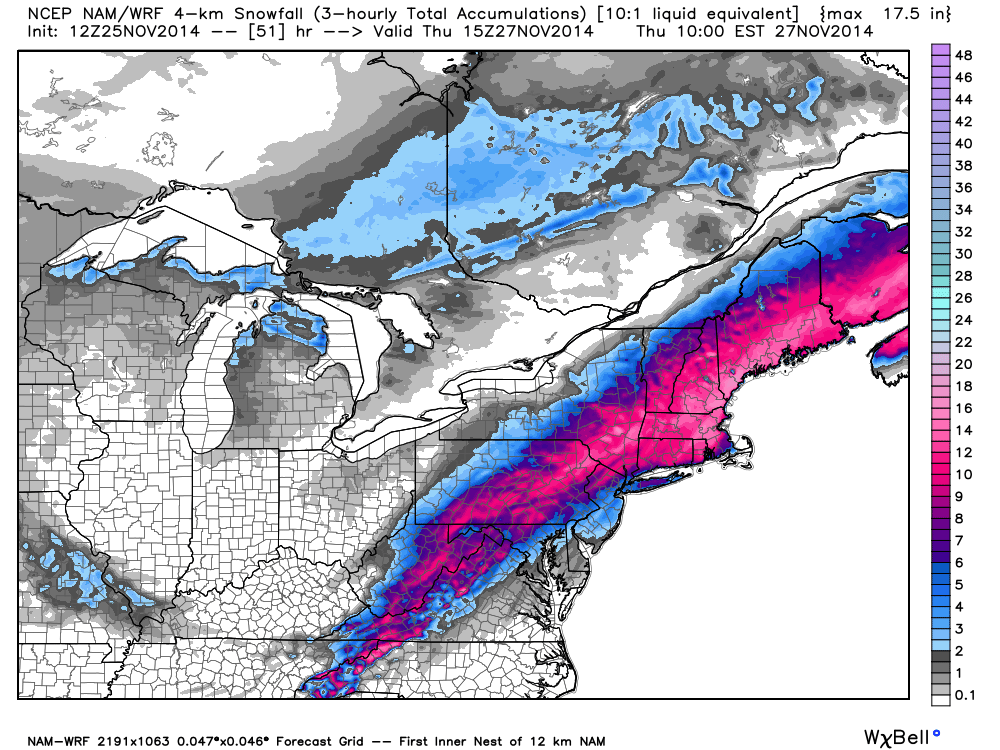