Hurricane Joaquin begins to depart the Bahamas, moves towards the North

Hurricane Joaquin is currently undergoing an eye wall replacement cycle and this has downgraded him to a category 3 hurricane. Slow weakening is anticipated as he begins to deal with some very dry air to the north and east of the system and it is not certain if he will become a category 4 hurricane again after the cycle ends.  Joaquin is currently located at 24.1 N and 74.7 W, with maximum sustained winds at 125 mph.  The minimum central pressure is up to 942 millibars.  Joaquin is moving towards the north at 7 mph. 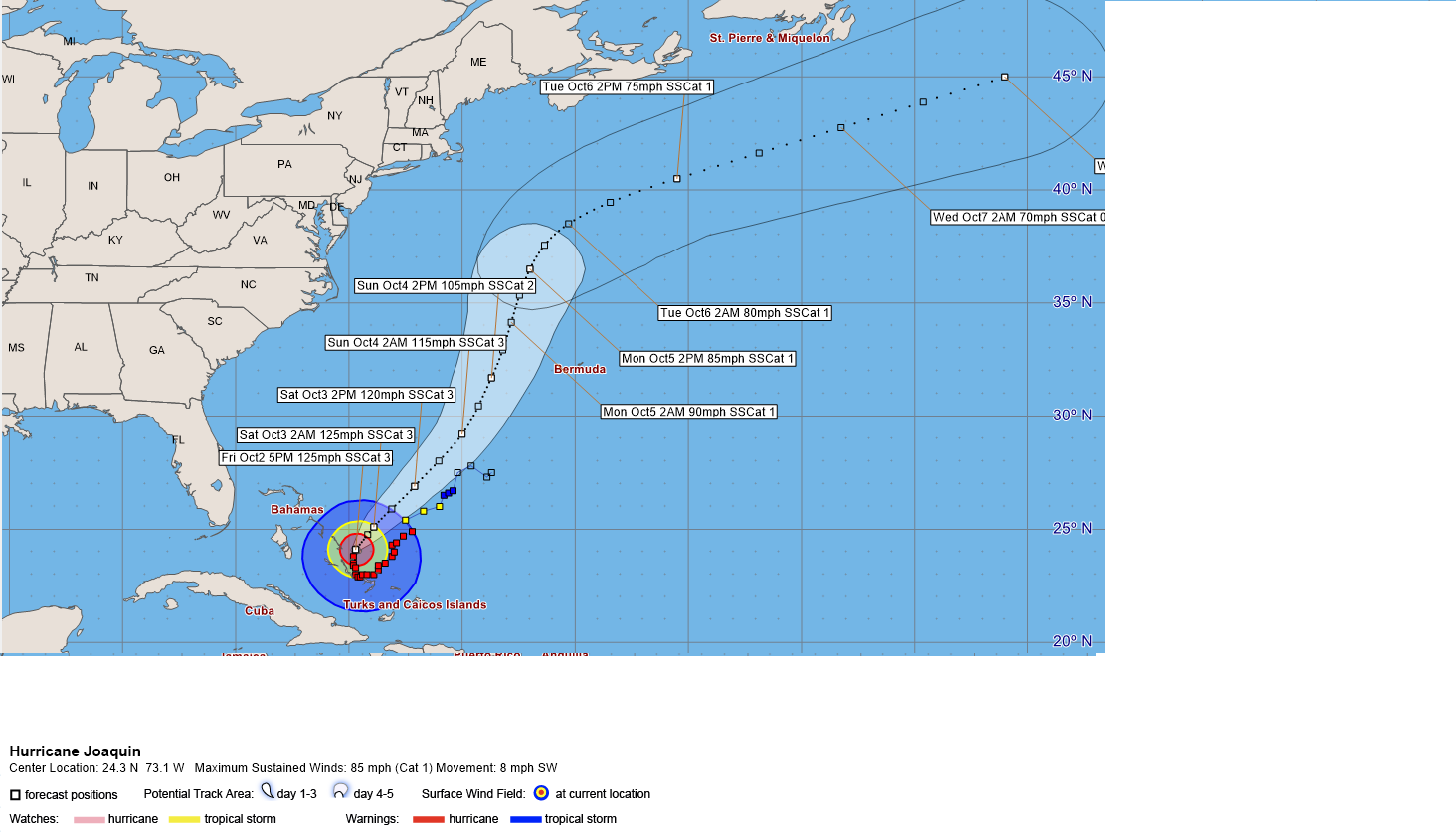 Thought he is currently travelling North, Joaquin has made some shifts to the east recently as he travels south of a ridge moving west across the Atlantic.  This ridge will carry him towards the northeast before allowing him to move north again in a little over a day.  Florida and the Bahamas will begin to see improving conditions as the tropical showers and high winds associated with Joaquin in the region begin to move away, though it will not be a quick process and the damage done to many of the Bahama islands has already been devastating.  Interests in Bermuda should keep a careful eye on this system.

Some model data does still attempt to bring Joaquin towards the coast but these models are in the minority and the actual data and ground/upper air conditions tend to discount the information put out by the models as a possibility so areas near the Outer banks and Delmarva peninsula can breath easier tonight.  Interests in Southeastern New England should continue to monitor Joaquin as there is significantly more data available that brings the storm closer to the coast there and increases the risk for tropical storm conditions due to the size of the wind field and track of the center, though landfall in New England is very unlikely at this point and hurricane conditions are not anticipated.

The Hurricane hunter aircraft is once again on its way to Joaquin to try an get as much information into the 0 UTC cycle of the models as possible.  This mornings run made 4 passes through the eye and allowed for another upper level run around both Joaquin and the area known as invest 90L, an area of organized showers and thunderstorms associated with the remnants of Ida Southeast of Bermuda.  This area of convection is expected to develop into a Tropical Depression in the next day or 2 and could impact the track of Joaquin some.

The Watches in Warnings that have been in effect for the Bahamas remain in effect as Joaquin slowly begins to move away.  Cuba has discontinued the tropical storms warnings that had been issued for the Eastern part of the Country including Guantanamo Bay, and the Meteorological service of Bermuda has issued a Tropical Storm Watch for the island.  Hurricane watches may be needed at a later time if Joaquin moves closer to the island than expected.

Stay with Firsthand Weather to keep up to date on all the latest information and we appreciate your patronage.