Hurricane Matthew and Everything You Need To Know

Hurricane Matthew continues to be just a phenomenal storm from a meteorological perspective; however, as many well know, tropical systems such as Matthew can have a huge impact on the lives’ of many people. In this article, I mainly want to address two main topics: where will Matthew track and what will the impacts be to the United States.

In order to do that, I want to set this up by taking a look at the overall pattern that is going to ultimately steer Matthew, and this will lead into the forecast, where I’ll discuss potential impacts. This is something that I discussed over a week ago on Facebook, and given the synoptic pattern, it was discussed why it was not wise to rely on forecast models. That has shown to be true since models have now trended westward with Matthew’s track with time.

Many located across the Southeast and those located even along and extending westward from the East Coast in general have become very familiar with the Bermuda ridge this summer, which has been very much responsible for the awful heat and humid conditions that many have had to deal with. Instead of looking at every single model run of every single model, your best bet in nailing down the the track of Matthew is accurately predicting the placement, westward extent and strength of the Bermuda ridge. A stronger Bermuda ridge will lead to a more westward track. There is clockwise flow around a ridge feature such as this in the Northern Hemisphere, and since Matthew is on the westward side of that, the flow around that ridge will continue to pull him northward and even northwestward as he increases in latitude.

I want to give you a bit of a visual of this to go along with what was just explained. The image below shows the 48 hour trends in heights at the 500 mb on the GFS model. Now notice all of that red shading right along the East Coast, above and around where Matthew is located off the South Carolina coast. Simply put, this indicates that the GFS model has trended stronger with the Bermuda ridge, and the green circle around it indicates that this is statistically significant. Again, the strength and placement of this ridge will be one of main drivers that determines how this system will track, especially as Matthew moves along the Southeast coast. Nailing down how this ridge evolves with time is pivotal to this forecast! It’s important to note that models, including the European model, have made this westward trend also. If you’re like me and always skeptical of the forecast models, the expanding Bermuda ridge is not that surprising, given that this feature was strongly present this summer and Matthew slowed down enough to give the ridge enough time to build westward after the cut-off low moved out of the eastern U.S. 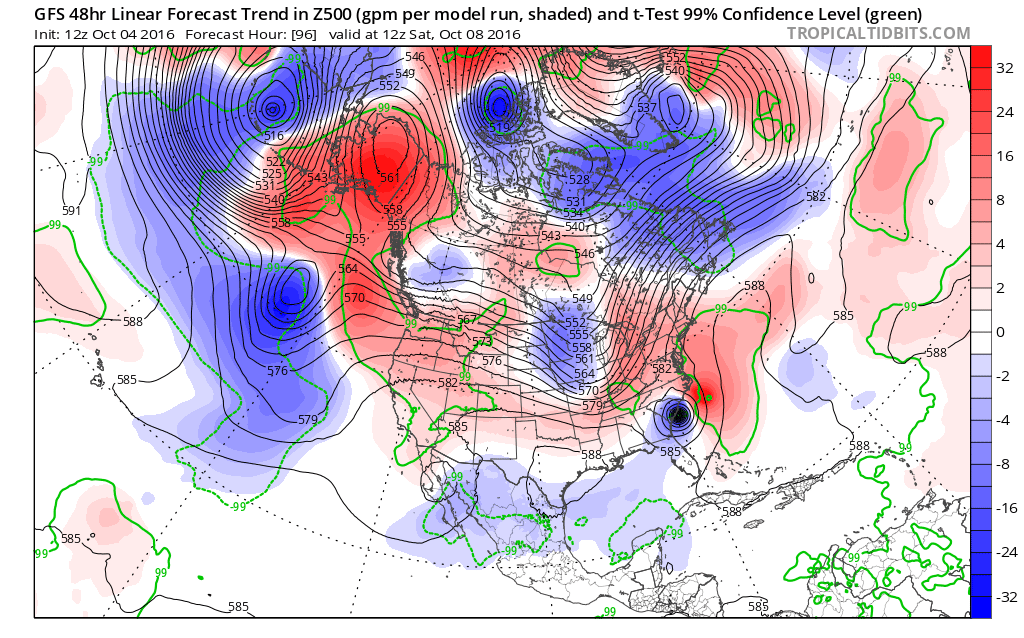 Due to the westward trend, the National Hurricane Center has issued hurricane watches for parts of Florida, and I expect those watches to eventually be extended to the Carolina coast. The Georgia coast is always a tricky spot to nail down, but watches will probably be issued for those locations, too. Keep in mind that I DO NOT expect Matthew to go into the Gulf of Mexico. This is a threat for the East Coast, particularly the Southeast coast in the near-term (late week to this weekend).

It Get’s More Complicated Once Matthew Moves Northward Thanks To A Gulf Of Alaska Trough Moving East:

In addition to the Bermuda ridge, a ridge extends up over New England into eastern Canada. This will likely keep Matthew slow-moving through the early weekend, but then things get interesting and even a bit more uncertain. A trough moving from the Gulf of Alaska will come eastward with time, but how quickly it moves east and how deep this trough digs will be a pivotal factor in determining where Matthew tracks beyond the Carolina coast. The latest European model has the ridge over the Northeast breaking down some, but it has the trough much weaker and having less of an influence on the system. The GFS model keeps the trough stronger farther east and has a bit more of an influence. This will be a big factor later in the weekend into early next week as to how Matthew impacts the Northeast, and by the way, I don’t buy the latest European’s solution of having Matthew looping along the Southeast. He eventually will make an extra-tropical transition as he interacts with a frontal system. Luckily, it is Tuesday, and we still time to nail down that part of the forecast, so I’ll have a separate update coming out on that!

Florida will begin to feel the impacts of Matthew on Thursday, which will extend through most of Friday. Impacts will be felt along the Georgia and Carolina coasts this weekend. Prior to this, coastal and even inland locations will start to notice an increase in winds and rainy conditions.

This threat is two-fold. First, residents from the east coast of Florida (probably north of Miami) up through the Carolinas should prepare for hurricane-force winds. Keep in mind that this system is not coming in perpendicular to the coast but will be riding parallel to the coast. Instead of trying to pinpoint one location on the coast that could experience the highest winds, Matthew could produce a swath of hurricane force winds along an extended stretch of the coast. Hurricane track is EVERYTHING. If it moves a bit more eastward, the impacts won’t be as bad, but if it comes in as projected on a farther westward track, this is the worst case scenario. As I explained above, there is reason to believe, aside from the model guidance issues, that the Bermuda ridge will build westward. Prepare for this scenario, and don’t take this threat lightly. We will eventually be posting impact maps for all of this.

The second big threat will be flooding, and one that must not be overlooked. East coastal regions from Florida to Virginia could easily receive 6 to 10 inches of rain with many locations possibly going over a foot of rain. Inland locations away from the coast could also receive very high rainfall amounts. Beyond Virginia, the Mid-Atlantic and Northeast will have to watch for this threat closely, too. However, how much rain those regions receive is dependent on what Matthew does after impacting the Carolinas, which as explained above is one aspect of the forecast that I’m more uncertain about currently. Luckily, there is enough time to get that nailed down!

The below image shows that sea surface temperatures are above normal across all regions that Matthew will be moving across in the coming days. High pressure aloft will continue to help ventilating Matthew, and if Matthew happens to weaken at all between now and its passing near the Bahamas, rapid re-strengthening may occur. As a jet streak moves eastward with the trough, this actually could enhance ventilation as he moves up the coast. 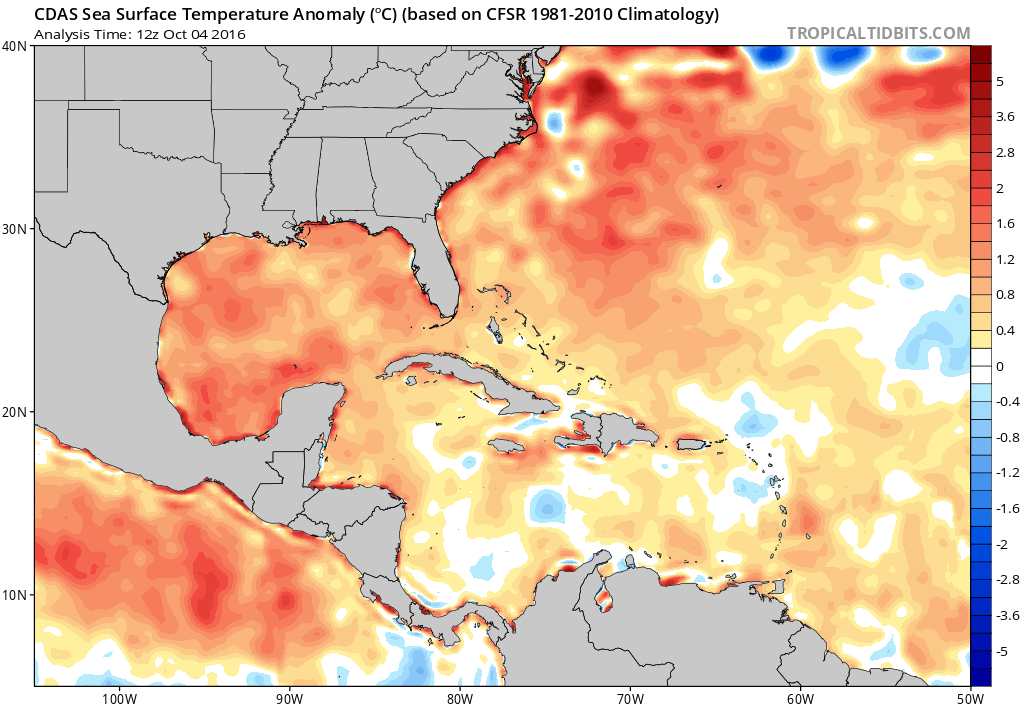 On a final note, I realize that many of these hurricane forecasts have not verified over the years, but that doesn’t mean that you shouldn’t be prepared. As I mentioned, this is not a situation where a hurricane is approaching perpendicular to the coast and we’re trying to find the exact point it’ll hit. When hurricanes come parallel to the coast such as Matthew will, slight deviations in track changes the entire forecast in a major way. Realize that early on, and keep in mind that while technology has helped improved the quality of these forecasts over the years, hurricane forecasts where such small details can be the deal-breaker need to not be taken lightly. That’s my long way of saying, be prepared and hope this forecast doesn’t verify.

Firsthand Weather will continue to keep you updated throughout this event. There was much more that I could have covered, but we want to be careful about throwing too much information at you at once. Hopefully this article clears up any questions that you may have, and we will continue to monitor the situation at hand!