Major Cold To Return To The United States

Well I hope you have enjoyed the warmer temperatures because winter is about to make a big return for many areas across the United States. While I always enjoy the winter months (especially if there is a lot of snow), I must admit that I am ready for spring and was spoiled by these warmer temperatures. If you go look at a current temperature map, you can already see that the colder air is already starting to push back in the United States, and that trend will continue as the week progresses. Forecasting during the latter part of the winter can get extremely tricky, and we are starting to enter that period. One of the main reasons is that climatologically things start to warm up, and when trying to forecast potential winter storms, it can be easy to bust on the forecast. It’s difficult enough to forecast in the middle of winter, but when you’re in the winter-to-spring transition phase, it can get really interesting.

Winter is definitely not over, and not only will a large portion of the United States experience well-below average cold, there could be several winter events to occur from late February through March. We’re about to move back into the same pattern that has given the central and eastern United States brutally cold temperature all winter, and with the cold air that will be in place, we could end up squeezing in a few more winter storms before we get into spring.

As many of you know, I’m a big fan of using cycles and trends to make my medium-range and long-range forecasts. The method simply works if you can correctly identify the cycles! Now some years are much more difficult to forecast for than others, but in many cases during the winter, certain cycles establish themselves, which literally can allow a forecaster to predict these cold events and winter storms well in advance. The cold that is on the way is going to be impressive to say the least, especially since we’re entering the latter part of the winter. In fact, there could be some records that end up being broken with this cold, so like I said, winter is definitely not over.

The big question will be how long this cold air decides to stay in place, and that will ultimately be a determining factor on how far south any wintry precipitation occurs. Remember, it’s not necessarily uncommon for portions of the southern U.S. to get wintry weather in early to mid March, but as the sun angle becomes more direct, it becomes increasingly unlikely as you get further into March. The Pacific North Atlantic index is moving into a positive phase while the Arctic Oscillation index is about to go negative. While I don’t expect you to really know what that means, this favors a pattern that sets up troughing in the central and eastern U.S. with ridging over the western U.S.

If you look at the model guidance, it supports this idea, and even shows ridging building in the western U.S. and over Alaska and also ridging building over the North Atlantic. Then you have a piece of the polar vortex that breaks off and moves south of the Hudson Bay. This has been happening all winter, and what happens is the cold air gets pushed south between those two ridges. And there you go, you have really cold air in the central and eastern United States.

With all of that said, both the Southern Plains and the Southeastern United States could have a good shot at getting another winter storm this season. While nailing down this forecast will require more studying on my end, don’t think that because we’re about to enter March that this can’t happen. Storminess is going to increase into March, and if the cold air is in place, then we’ll likely be dealing with a winter storm or two. Going further into March, there could even be a big East Coast storm, but again, track and the amount of cold air in place at that time will determine who gets what.

I’m going to end it there for tonight! I posted a couple of maps for you to take a look at below: one that shows you the troughing that is going to setup over the central and eastern U.S. and one that shows CPC’s prediction of below average temperatures to continue into March for the eastern U.S. As I always say, be sure to like our Facebook page if you haven’t already done that because I post updates on there quite often. As a quick aside, be sure to check out the $500 scholarship that we will be offering to a current or prospective student this fall. Details on that are here! Have a great night, everyone! 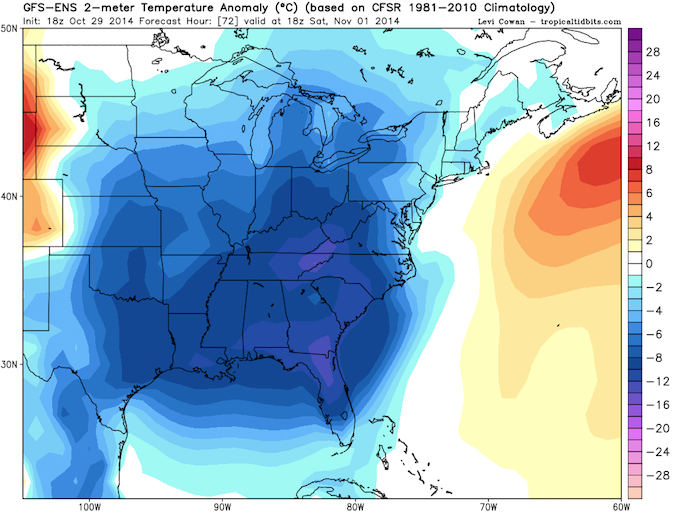 CPC Forecasts Below Average Temperatures for the Central and Eastern United States.