Our preview of what is to come this winter has already arrived, and extremely cold, Arctic air continues to move east. What’s remarkable is that most of the nation is currently or about to experience well-below average temperatures, and these cold temperatures are here to stay for most, if not all, of November. I’ve noticed on some of the model guidance that temperatures try to warm up along parts of the East Coast and Florida later in the month, but any warm-up will be very temporary given the pattern that we are locked into. This first push of Arctic air that is currently sweeping across the nation is the first of many Arctic blasts that will occur this month. This colder pattern is not due entirely to the polar vortex but is instead due to what is referred to as an omega block. This omega block signature occurs when there is a low-high-low pattern in the upper levels of the atmosphere. In this particular case, a huge ridge has pumped up over Alaska giving them unseasonably warm temperatures while troughing surrounds this ridge on both sides. A deep trough in currently located over the United States, and these kind of setups can stay around for weeks. I explained in my previous article why all of this has occurred.

Things get interesting with the possibility of a winter event across a portion of the United States this weekend and early next week. I’m still trying to iron out all of the details, and the forecast gets particularly tricky for the more southern regions of the U.S. Remember, we’re just approaching the middle of November, and the fact that we’re talking snow/ice this early in the year is remarkable. There is a disturbance that is predicted to move across the Southern Plains by the end of this weekend, and a surface low could potentially develop along the southern Gulf coast states by late weekend/early next week. Given the cold air mass in place, it is possible that areas across the Southern Plains could get a round a wintry precipitation including locations like Dallas. As the surface low develops along the Gulf, there is a chance that there could be some snowfall across places like northern Mississippi, northern Alabama, northern Georgia, parts of Tennessee, and up the Appalachians. Maybe even places like northern Louisiana and southern Arkansas could get on the wintry side of things also. 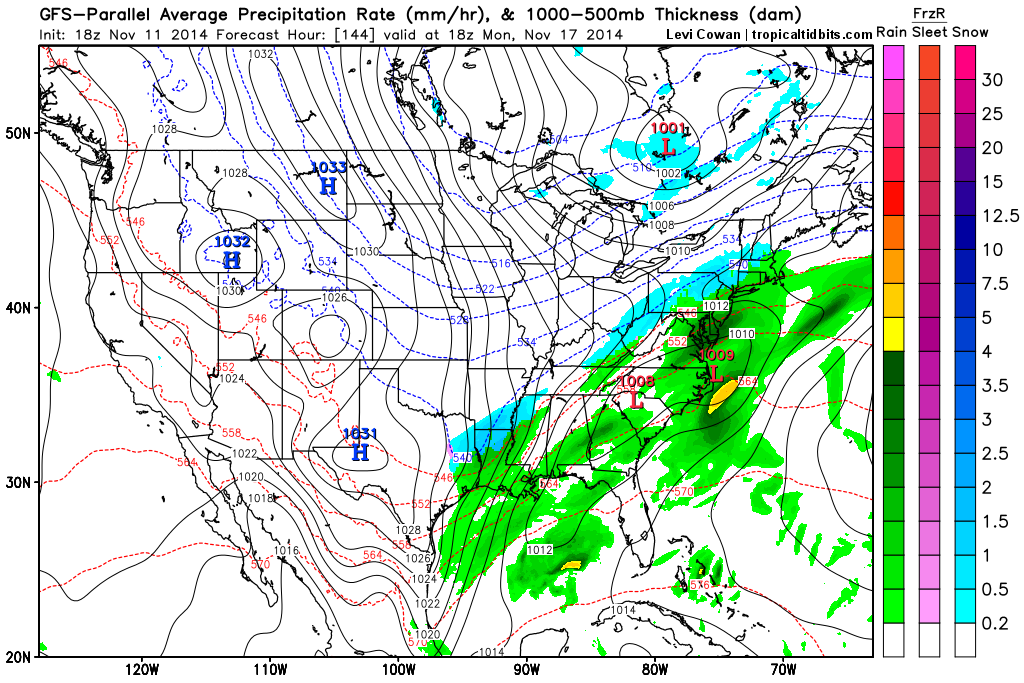 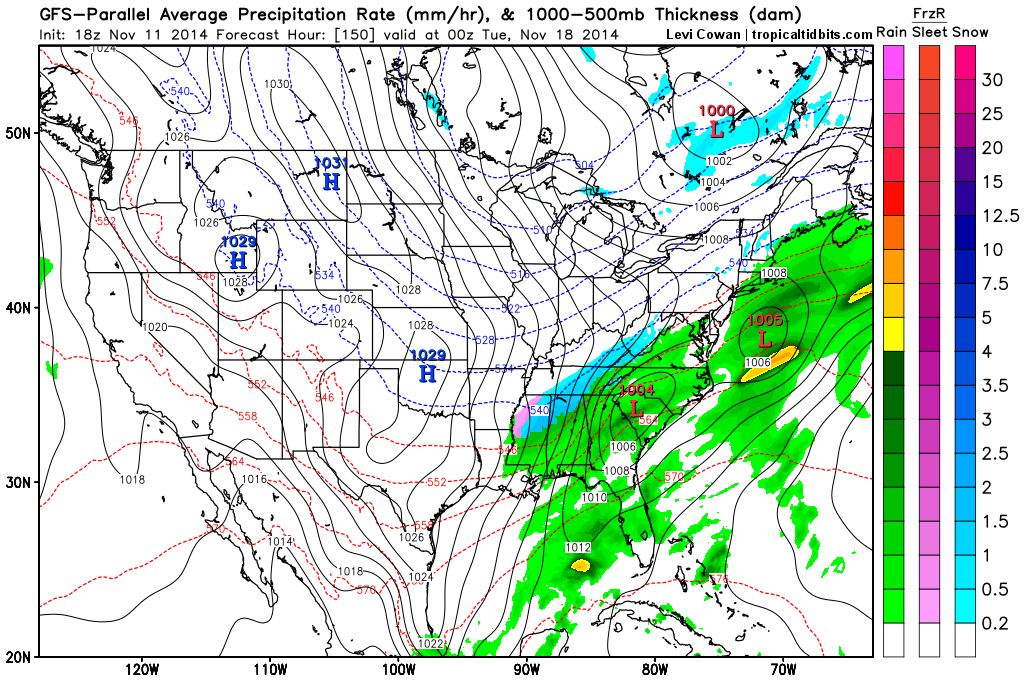 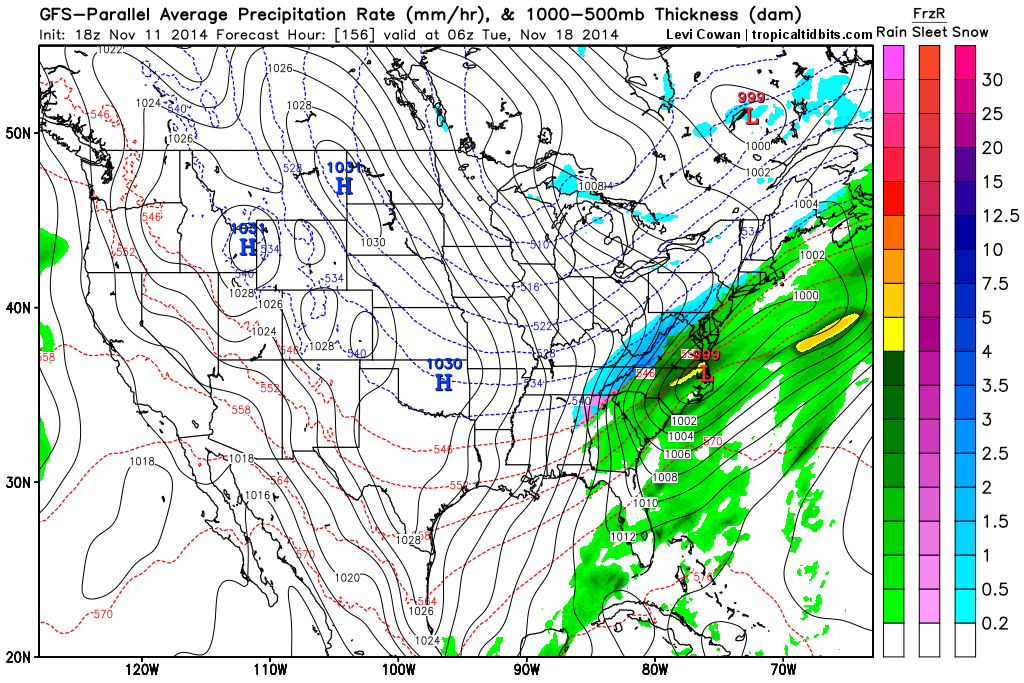 I’m not ready to call for a big winter event just yet, and I will admit that I have several uncertainties. The low pressure that is predicted to develop along the Gulf coast is the typical track for southern winter events. It’s just so early in the season, which makes me skeptical, although the cold air that is diving south is nothing short of remarkable. The European model is less aggressive with snowfall totals than the new parallel GFS model is, and even though this new GFS model is a major upgrade from the older GFS, I almost always rely more heavily on the European model. If what the new parallel GFS is predicting comes to fruition, many of you across the South will be borderline on whether you just get a cold rain or wintry precip. Some may get both.

Give me a day or two to keep an eye on the latest trends, and I’ll put out an extensive article on this potential system if it starts to catch my attention more.

I am becoming more convinced that there is going to be a big storm system move across the United States around Thanksgiving. Nailing down the specific dates is difficult at this time, but this event looks to occur at or just before Thanksgiving. The pattern will likely favor a very suitable setup for the potential of a big event that could bring wintry weather and severe weather. Of course, the severe weather would occur in the warm-sector of the system, and the heavy snows and ice would occur in the cold sector. The big wildcards at this point are 1) the amount of cold air in place, 2) the exact track of this potential system, and 3) the overall pattern over the United States. As I’ve mentioned several times, model guidance has started to pick up on a split flow pattern over the United States around this timeframe, where you have a polar jet stream across the north and a sub-tropical jet stream further south. Many times, these two jets can interact to provide ripe conditions for a fairly large storm to develop. I’ve noticed that some model guidance has started to pick up on potential storminess over California, which could be signifying the possible development of a more active sub-tropical jet stream.

This is something that I will continue to keep an eye on and keep you updated on. There’s a lot going on, and we have a while before we get to Thanksgiving. We have plenty to watch before then, but I will continue to mention the possibility until I become convinced otherwise.

For all of the new readers, be sure to like Firsthand Weather on Facebook. That’s where I typically write daily updates, and then I put my bigger updates on this website. Be sure to subscribe to my newsletter that will start back up this winter. Spots are limited!