Despite the warmth that has prevailed across much of the eastern two-thirds of the United States this month, the configuration of the overall pattern has kept much of the U.S. in a very active weather pattern. The core of the warmth has been established over the eastern third of the U.S. with a tendency for troughing over the western U.S. This established a pattern that was favorable for systems moving into the Pacific Northwest, digging southeastward into the Plains, and then shooting back northeastward. This is the track that the most recent storm system will be taking, which is currently dumping copious amounts of snow over New Mexico and western Texas and was responsible for the deadly tornadoes in Dallas yesterday. This system is definitely not even close to being finished and will be bringing additional flooding, severe weather and winter weather to other regions of the U.S.

Pattern Change On The Way:

The coming pattern change that has been discussed for quite a while on Firsthand Weather is going to begin to emerge right around or just after the New Year. The persistent ridge over the eastern U.S. is going to start flattening out, and the temperatures are going to dip below average over much of the U.S. It’s important to realize that this transition is going to take some time, and there may be some volatility to the overall pattern before the anticipated colder pattern becomes established in the eastern U.S.

According to the forecast models, expansive ridging (blocking) is going to set up from the Pacific Northwest into western Canada and Alaska. This means that a general warming trend will occur in all of those regions, however it could take a decent amount of time before that warmth sets up in the northwestern U.S. into the Northern Plains. It’s important for me to point out that the forecast models have been all over the place due to this transition. While most meteorologists have gone from very warm forecasts to very cold forecasts (probably because of what the forecast models are showing), let me caution everyone that the long-range model guidance will likely not handle this transition well.

It still seems to me that the “real deal” cold won’t establish itself over the eastern half of the United States until mid-January or maybe even closer to February, but January is going to bring with it several Arctic intrusions with a number of winter storm opportunities. I think it’ll be important to have someone like the WDR Roofing Company – Cedar Park look at your roof and look at your emergency storm plans for this winter. It’s important to be prepared. As I’ve said since July, December would be warm, January would be a transition month, and February would be brutal (cold-wise). For all of you snow lovers out there, you actually don’t want such a cold pattern that the dominant storm track gets shoved too far to the south. In particular, that happened a few times last winter across the South, and I remember during the 2009-10 winter, there were places along the Gulf Coast (like Houston) getting snow before regions to the north were. In other words, you typically want to get just enough cold air for a winter storm!

Below is the projected temperature anomaly map for January 5th according to the European model. If you’re in the blue, you’re expected to get below average temperatures, and if you’re in the red, you’re expected to get above average temperatures. I’m more focused on the overall pattern than exact numbers that are shown in the legend on this map. Many of you are going to get your first real taste of winter cold as we start making this pattern transition. 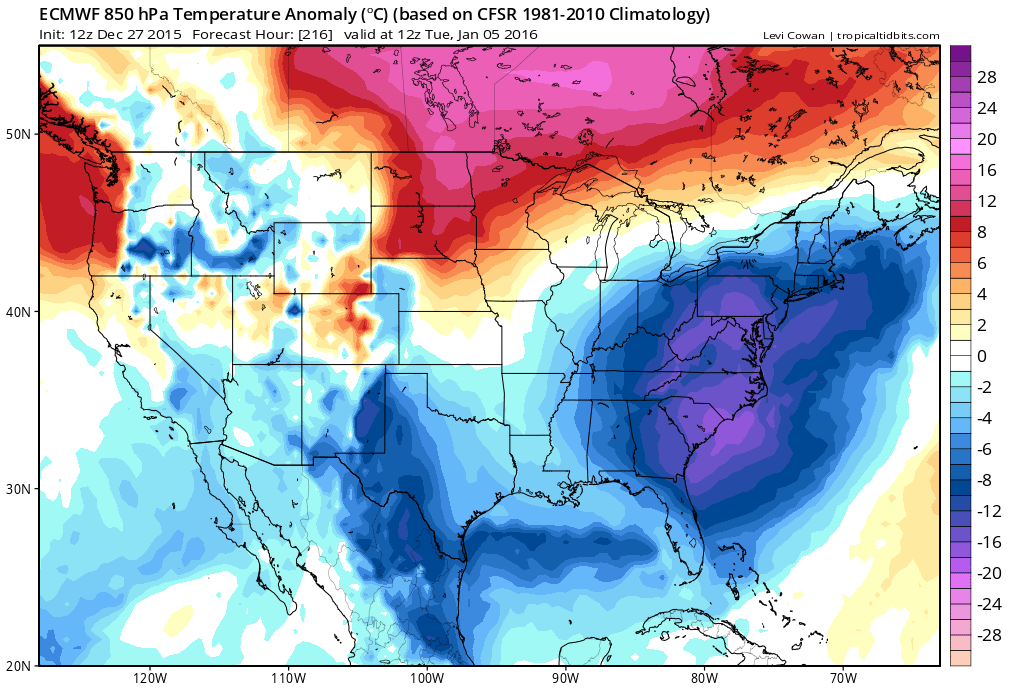 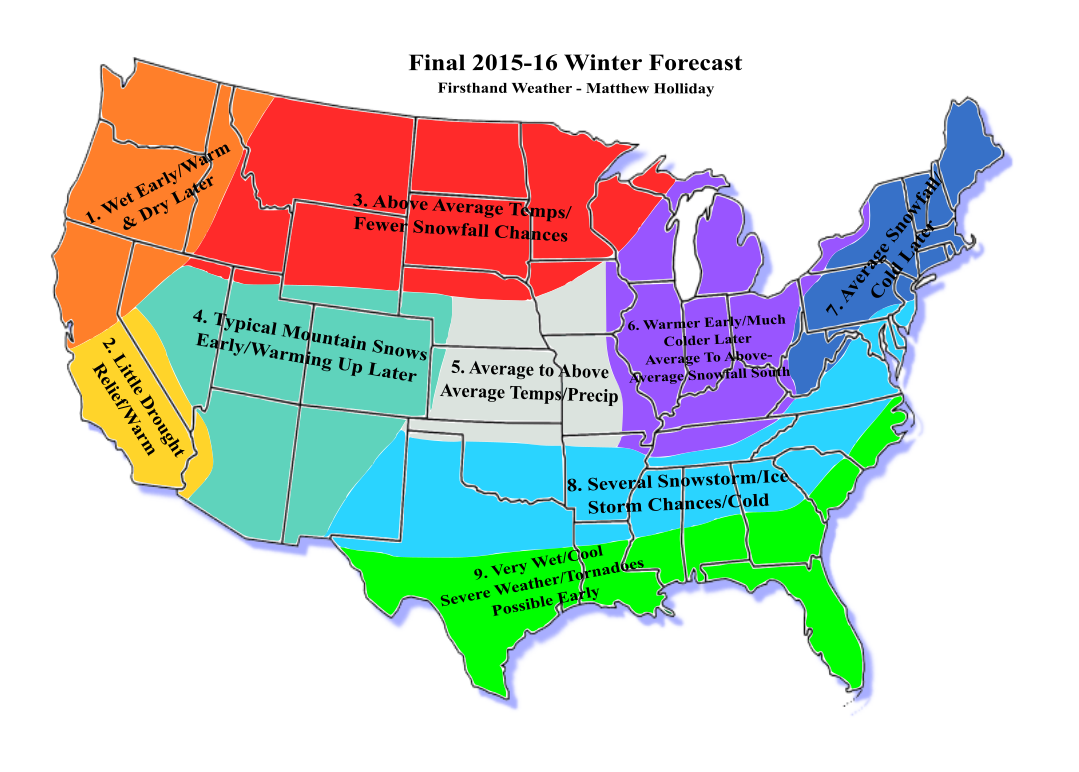 The active sub-tropical jet stream is going to remain established from Baja California, across Mexico, and into the Southern Plains and Southeastern U.S. As numerous cold intrusions will likely dig farther and farther south as we progress through January, this is going to open the door for the Southern Plains, Southeast, and even the Mid-Atlantic to be at higher risk of getting winter storms. In January, I don’t anticipate that any trough is going to dig so far south that the moisture fetch will be suppressed too far to the south.

Right now, nothing is showing up on the models for the first half of January, but I believe that the sub-tropical jet stream is a little too far to the south in the guidance. Despite the fact that nothing is really showing up on the model guidance, I am anticipating that a winter storm will occur within the first one to two weeks of January, potentially impacting parts of the Southern Plains and Southeast and maybe even the Mid-Atlantic. Pieces of energy are going to have the tendency to enter from the Pacific and cut across the southwestern U.S. or Mexico and move eastward. IF the cold air is sufficient, we could have our first winter storm on our hands (for the areas farther east that haven’t gotten anything yet), which could also have a severe weather component with it in the warm sector of the system.

In the long-range like this, it doesn’t really matter to me if the forecast models are picking up on an individual storm. Beyond 5 to 7 days, the forecast models are going to change so much that it’s not even worth pointing anything out, especially when the overall pattern is expected to change. What I try to do is identify the regions that will be more favorable for these kinds of events occurring, and that’s what I have done here.

Also, there could be an increased chance for lake effect snow events to occur due to this changing pattern, and with any system that swings down from Canada, this could bring an increased risk for parts of the Northeast to get some wintry precipitation. Also, it’s worth noting that parts of the Northeast will be impacted by the current winter storm that all eyes are currently on.

Of course, I will continue to monitor any individual storm system that comes up and will point those out to you as they start to show up. If anything changes in any way, I will definitely let you know, so please visit Firsthand Weather as often as you can.