I am just coming down from the most intense two weeks of forecasting that I have ever gone through, but given this active pattern, there will be no break anytime soon. We are going to continue in this very active pattern until at least the beginning of March. The time period after the first few days of March becomes a bit more uncertain, but I won’t have time to talk about that in this article. There’s already going to be so much going over these next couple of weeks that it will be difficult to cover everything.

Record Cold On The Way This Week With Some Snow:

The eastern half of the United States is about to get record cold, due to a strong trough that will be digging south along with a cold Canadian high pressure system. I know that there is always a lot of hype about the polar vortex, but in this case, it would be okay to blame this on the tropospheric polar vortex. As aggressive as the cold is showing up on the model guidance, I wouldn’t be completely shocked if it’s underestimating it in some areas.

Many of the nighttime low temperature records with be broken quite comfortably on Thursday and Friday mornings, and even daytime low temperature records will be broken. Many are currently without power, especially in the areas that got a significant ice storm out of this last winter storm. Although temperatures will be very cold tonight, tomorrow night and Thursday night will just be brutal. If you’re expected to be without power for a few days, try to plan for this because you definitely don’t want to be in a cold house with temperatures in the single digits or below zero outside.

Expected temps for Thursday morning, according to the latest GFS. 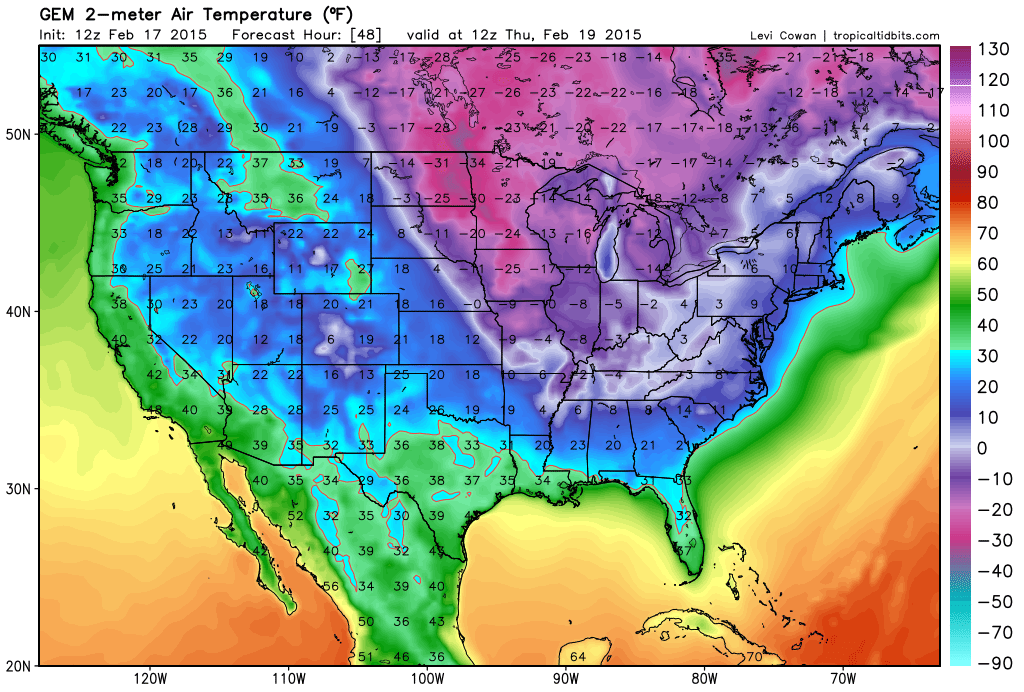 Expected temps for Friday morning, according to the latest GFS. 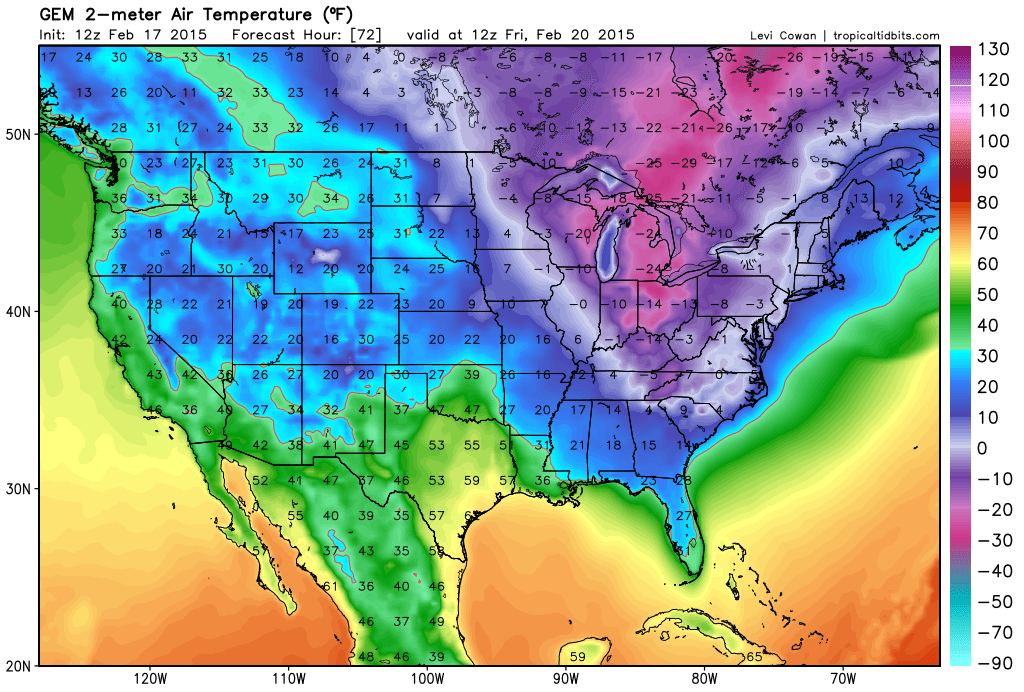 A little piece of energy will be moving quickly southeastward tonight and tomorrow. This could bring some quickly snowfall accumulations from the Central Plains to the Tennessee Valley and to the East Coast even as far south as NC. I wouldn’t even be surprised if places as far south as extreme northern AL, GA and SC got some light snow tomorrow. Snow ratios will be high so I would’t be surprised if a few areas got a quick several inches farther north. Basically, some of you may get a little surprise if you’re lucky.

Many of you have been asking me about another potential winter storm this weekend. This is going to be another very tricky forecast, but there is a pretty decent shot that some areas across the South could get a winter storm out of this. Some of the same areas that were just impacted by this last storm could be impacted again.

An area of low pressure is going to develop over Texas/Oklahoma as the cold Canadian high pressure system that I discussed above is moving south and east. Now a lot of the model guidance is tracking this storm northeastward from the Southern Plains, and while I’m sure some changes in track will occur which could change the overall outcome for some areas, I’m not in complete disagreement with that track.

Now we could have the exact same thing happen this time that happened with the last storm. I’ve discussed on this site many times before how surface high pressure can cause cold air damming east of the mountains or in general, wrap around cold air from the north. A very cold and dry airmass is already going to be in place east of this developing low pressure system, and what the forecast models do is spread a lot of moisture pretty far to the east from the main low pressure area located over the Southern Plains. Because this surface high pressure system will probably try to keep that cold air wedged in for a while, places like northern Georgia, Upstate South Carolina, and North Carolina could be looking at another winter storm. I’m not even ruling out Atlanta and Columbia being impacted, but just like last time, it could be a very close call.

This is on Saturday morning, according to the GFS. Please understand that this is only one point in time, meaning that additional areas may have gotten frozen precip before this time or will after this time. 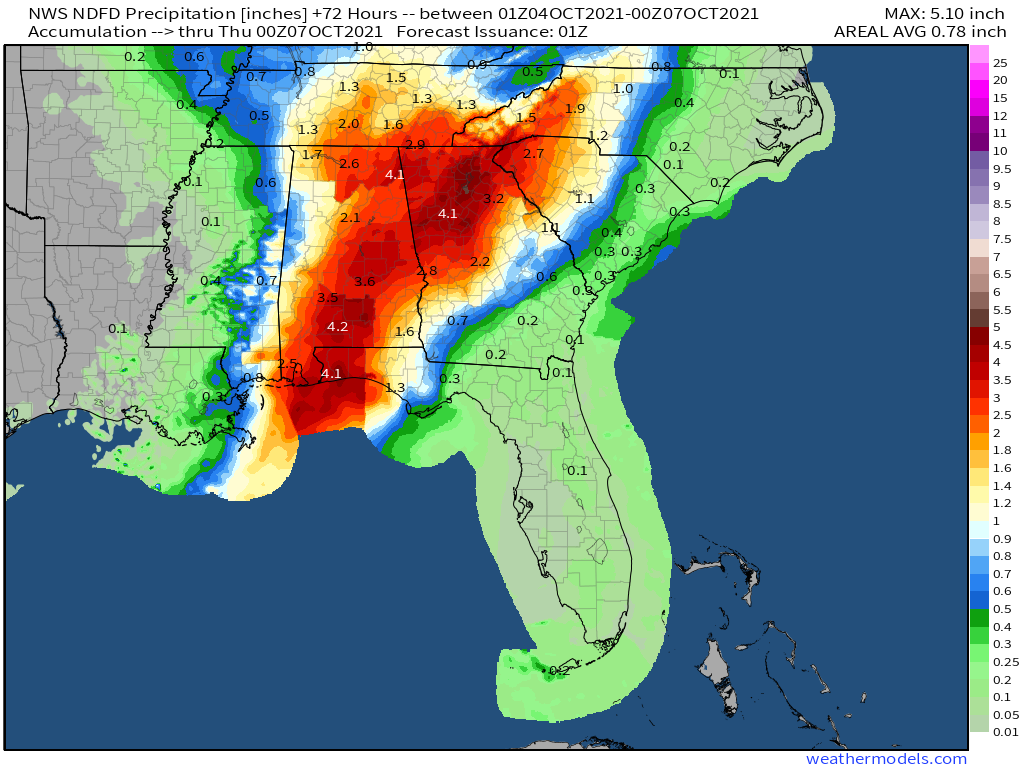 Areas north of the regions that I mentioned above could be looking at another big winter storm out of this. If you got hit with the first one, just know that you could get hit with this one, too.

Forecast models did okay at the very end with the track of yesterday’s winter storm, but they just don’t handle things well when a dry, cold airmass is involved. Take yesterday for example, and I’m glad that I caught it early on. Evaporational cooling is very good about cooling a dry airmass, and with the kind of cold air that will be left over with this big Arctic plunge coming this week, many of us may have some surprises in store.

Just so you know, I’ll have to put another article out on this storm either tomorrow or Thursday. I’ll detail locations and precipitation-type in that article. There also may be a severe weather component to this storm in the warm sector that I will need to discuss also.

Big Winter Storm Potential On The Table In 7 to 11 Days:

I put 7 to 11 days in the subtitle, but this is still a long ways out, so you have to give or take a day. This has the potential to be the biggest winter storm that much of the South has seen so far this season. There is still much uncertainty, given that many of the forecast models aren’t even showing this storm. I will have an article out this weekend, if the potential is still there. Try not to get too hyped up about this yet until I have more details.