Before I get into the actual forecast, I want everyone to be fully aware of the complexity of this forecast. With this particular winter storm, there is going to be a tight gradient between very heavy snowfall accumulations and just rain. There actually may be areas in between that could get ice, which is something I’ll discuss below. Because of this tight gradient, a jog 25 miles north or south of the surface low pressure system could be the difference between getting over 6 inches of snow or very little. That’s a BIG deal, and why I keep saying to expect the unexpected with this storm. I always say, prepare for the worst just to be safe.

Now that I have that mini-speech out of the way, let me get into this forecast. The upper-level disturbance currently located over New Mexico/Arizona is one heck of a system. From past experience, I’ve come to realize that forecast models typically don’t do well with these cut-off low setups. Many times, they end up being stronger than projected, some areas get way more snow than predicted, and others areas don’t. That’s just how it goes.

One thing that you must know is that the snow is going to come down fast, particularly where you get convective snow banding (thundersnow). Because of the dynamics of this system, there will be areas that get over a foot, from the Southern Plains to the East Coast. In this section, I want to give you a rough timeline of everything and talk about accumulations.

Heavy precipitation is going to develop across the Southern Plains later tonight going into the morning hours. Some of this may start out as rain or some sleet/freezing rain, but all precipitation will eventually change over to heavy snow and continue through the morning. Places like Dallas and surrounding areas could easily get 3 to 6 inches of snow with locally higher amounts.

By tomorrow morning, the precipitation will have spread farther east with southern Arkansas and northern Louisiana getting heavy snow. Again, some of these regions, particularly into southern Arkansas could easily get 3 to 6 inches of snow. With this system, it’s not going to necessarily matter if temperatures are a degree or two above freezing in places; snow will still fall and accumulate.

By later in the morning, precipitation will likely expand as far east as Alabama. If precipitation does start out as rain, it will eventually change over to heavy, wet snow over northern and parts of central Mississippi. This will then expand eastward into Alabama. Ice could occur south of the heavy snow band. I would say that a widespread area of 3 to 6 + inches of snow will fall over these areas. Birmingham is probably going to be closer to that line, but 2 to 4 + inches looks like a good forecast to me. The snow could extend as far north as the southern half of Tennessee, so I expect places like Memphis to get decent accumulations out of this also. A band of heavy snow could set up over northern portions of Mississippi and Alabama (just north of Birmingham). That’s where you’ll really have to watch for your higher snowfall accumulations, where localized amounts could be quite high.

Probability of 4 inches of snow or greater through Thursday morning: 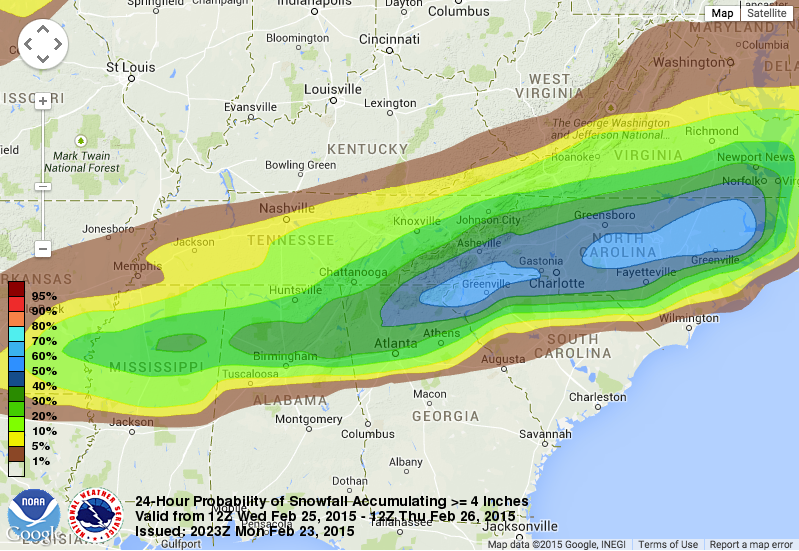 Farther east into Georgia, precipitation will develop and spread into the state sometime in the afternoon hours. Some of these areas could start out as sleet/freezing rain or rain, but a change to heavy snow will occur later in the afternoon into the evening hours. Atlanta is another one of those cities that will be close to the line. I’m going to say 2 to 5 + inches for Atlanta, and then I’m thinking 4 to 7 + inches north of Atlanta. Across Upstate South Carolina into the Charlotte area, I’m thinking around 3 to 7 + inches of snow along and north of I-85. Again, thundersnow could occur causing totals to be higher in locations that are under that heavy snowfall.

It gets a little more tricky south of I-85, which is going to depend on the overall track. I still say that the totals could be quite high south of the interstate, but they will drop off quite drastically the farther south you go. Farther north into North Carolina into eastern Tennessee, this looks to be a decent snowstorm to me also.

Heavy snow will spread northeastward into the Wednesday evening and overnight hours into central and eastern North Carolina and up through southern and southeastern Virginia. Some of those regions including places like Raleigh/Durham could get 6 to 10 inches of snow. Localized areas could even get over a foot. There is some question as to how far north this system will go, but right now, I’ll just focus on these areas.

Although the forecast models aren’t showing this, I honestly wouldn’t be surprised if icing issues occurred south of the regions that I have getting snowfall accumulations. This is something I’ll keep a close watch on and will post an update tomorrow, if needed.

This is about as specific as I’m going to get. We’ll see how I do with actually putting out accumulations, but I couldn’t get around not doing it with this storm. Again, a shift in track could change all of this, so some changes will need be required. If I were you, I wouldn’t focus on actual snowfall accumulations. Whether you get 2 inches or a foot, it is still a big deal across the South. I just want you to know where the heaviest snow will likely setup.

By the way, I appreciate everyone who ordered a Firsthand Weather t-shirt or hoodie. If you’re still interested in getting one, click here, and check them out. Some of you asked me about adding different styles and colors. I plan on contacting Teespring on Friday to see if they’ll do that.

The photo below was just too great not to share. David Waid from Helen, GA sent this to Firsthand Weather this morning. Just incredible! 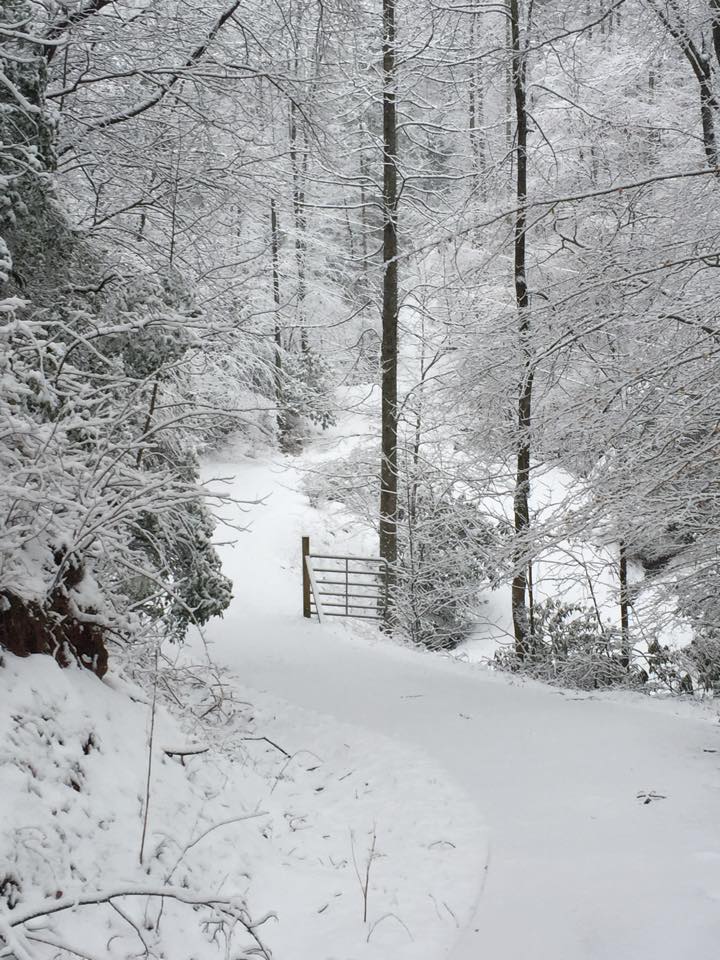