I’m going to admit right out of the chute that this is one tricky forecast and will likely need to be modified. Most of the forecast model guidance agrees that there is going to be a low pressure system to develop over or around Florida and then deepen as it moves up the coast. It is pivotal that we get cold air to move into the eastern U.S. first before the storm moves up the coast. The biggest concern that I have had all along is that there is no true blocking over over Greenland or eastern Canada to lock in the cold air over the eastern U.S., which is why it’s key for the cold air to already to be in place. Still, we could have a situation where rain transitions to snow along many of the coastal regions while areas more inland could most likely see all snow. This has the potential to be a hugely disruptive winter storm on Wednesday, and I recommend that if you have plans to travel up the East Coast that you either leave a day early or be prepared to cancel those plans if needed.

Track and Timing Are Key:

Now, I said that most of the model guidance has now come into agreement that this storm is going to develop and move up the East Coast. The biggest uncertainty is how far off the coast or how far inland this storm will track, which will make all the difference as to who gets snow, mix, rain, or nothing at all. That’s assuming that adequate cold air is already in place or will move in as the storm moves up the coast. Timing is always key in situations like these! There will be a southern branch system that will be moving across the Gulf Coast states and a northern branch system that will be diving down from the northern Rockies, and these two pieces of energy need to meet and “phase” together. The overall pattern will likely favor cyclogenesis (the development of a low pressure system) around Florida, and this strengthening low will get pulled up the coast. At least that’s what seems most likely right now.

The European model is almost always the first forecast model to catch onto these types of East Coast storms, and the GFS then follows behind and has to play catch up. That’s what we’re currently seeing take place with the European model as it has been forecasting a big, further west East Coast snowstorm for numerous runs, and finally, the GFS model has now started to pull the track further west along the East Coast. Again, the track of this system is everything and is a big determining factor as to who gets what. The European snowfall totals are likely overdone for many areas due to the lower snow to rain ratios, and the fact that some regions may see a rain-to-snow transition or have other frozen precip mix in. My overall point is that the European model (while it may be too far west) is likely the most viable solution as far as its track of the system, but don’t take the actual snowfall totals to heart. One thing to note is that many of the 00z Euro ensembles (a combination of many variations of the European model) were further east in their tracks. Changes in the potential track will likely occur between now and Wednesday, which is why this is such a difficult forecast and will likely require some modification.

Get prepared because this is likely going to be a hugely disruptive winter storm on the busiest travel day of the year. The GFS model has trended further west, and while it is not currently as far west as the Euro, it could now be a viable solution. It has accumulating snow from northern South Carolina/Georgia all up the East Coast but is further east on the heaviest snowfall accumulations. Because of the European model being further west, the heaviest band of snowfall is further inland, and warmer air gets pulled in along the immediate coastline.

My biggest concern regarding snowfall in the Southeastern U.S. is whether or not enough cold air will be available to support snowfall or frozen precipitation. Places like northern Georgia, northern South Carolina, and the westward third of North Carolina could be in that “surprise zone.” Again, the track and amount of cold air in place will be key, but I believe the potential is there.

The Mid-Atlantic and Northeast has a good chance that they will be dealing with a major winter event with heavy snow. As I have said, the track is key as to whether the area of heavy snow is more inland or just along the coast. Again, the European model is further west, and while the GFS model has trended further west, it is still further east. Since many of the European ensembles are further east, I am going with a blend of the two operational models at this time. 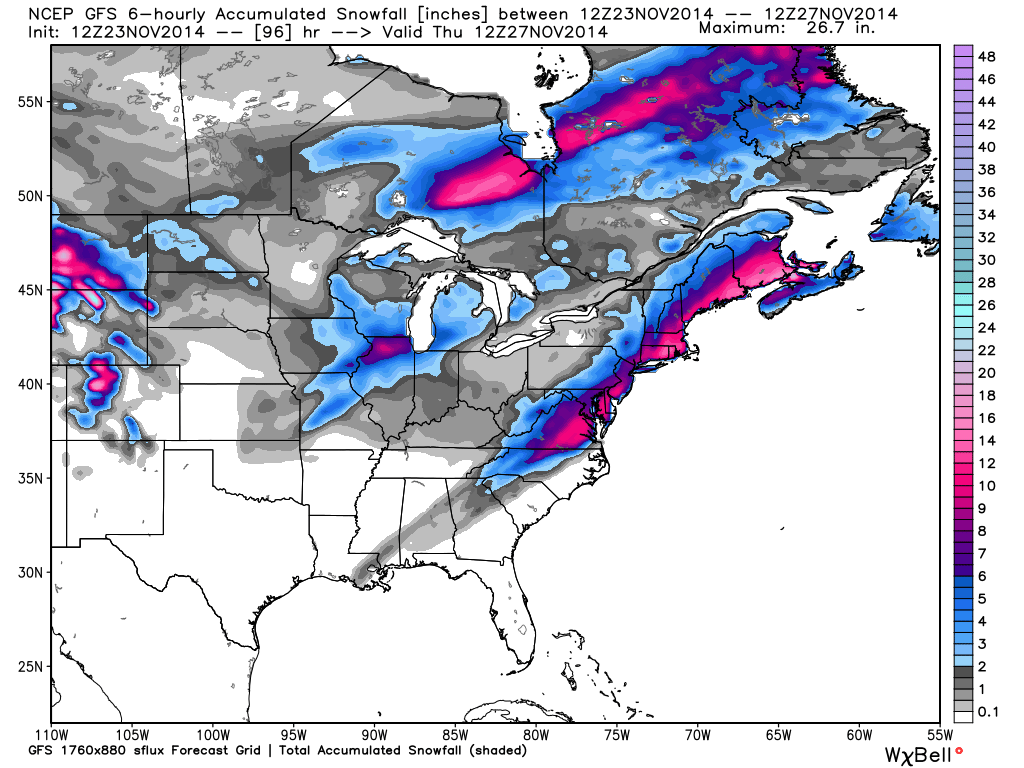 The latest GFS model is further west with the heaviest snowfall accumulations than previous runs.

Please note that I can’t legally show you the hi-res European model that has the heaviest snowfall accumulations further to the west.

Again, I want to acknowledge that this is a highly uncertain forecast and has been very tricky for me to put all of this together. I plan on putting out another article on the site tomorrow because by then, more model data will have come in. The goal is to eventually put out snowfall maps after the forecast is better fine tuned.