We have a lot to discuss tonight, so I want to keep this article relatively brief and want to get into more specifics on the timeline and exact locations that will likely be impacted tomorrow (Wednesday) and tomorrow night. Last night, I wrote up a very detailed analysis on this severe weather potential that will likely take shape tomorrow, and I encourage you to go back and read that article in case you missed it. Not a lot has changed since that article.

There remains to be a pretty strong model consensus that a potential tornado outbreak could unfold tomorrow across parts of the Mississippi Valley, Tennessee Valley and also including a lot of surrounding regions. I’ll have more on specific locations in just a minute.

A Few Details I Want To Mention:

Before getting into specific locations, a broad mid to upper-level trough is continuing to move eastward as expected, which will set up the proper dynamics for this event to occur. A strong sub-tropical jet stream currently extends from the Pacific into Mexico and is feeding adequate moisture into the southeastern U.S. This moisture plume will continue to expand northward as a frontal boundary continues to push north as a warm front.

As expected, a tongue of drier air should be available at the mid-levels, further destabilizing the environment. Daytime heating tomorrow should adequately destabilize the environment further. A strong low-level jet stream will be present and eventually extend northward. The mid and upper-level winds should increasingly become favorable throughout the day due to the eastward moving trough. Winds will increase and change with height in a clockwise direction (a favorable directional and speed shear environment). Basically, conditions will be very favorable for supercells capable of producing tornadoes. In fact, some of these tornadoes could be strong.

As I’ve mentioned several times already, overnight and early-morning convection could keep the environment more stable than expected, however I wouldn’t count on that occurring. It’s really only going to take a couple hours of sunlight to quickly destabilize the atmosphere, and the model guidance indicates that any leftover convective activity will move out in time.

Locations In The Danger Zone:

Please take special note if you’re in the areas that are listed.

Additional regions that could be at risk for tornadoes: the rest of Alabama, the rest of Louisiana, western half of Kentucky, southeastern Missouri, southern parts of Illinois and Indiana and early on in eastern Texas. The threat could expand eastward into parts of Georgia towards Wednesday evening. I will also be keeping a close eye on the possibility of this threat expanding into eastward parts of Tennessee, western North Carolina, and Upstate South Carolina into the overnight hours, although the greatest tornado risk will occur west of these areas. 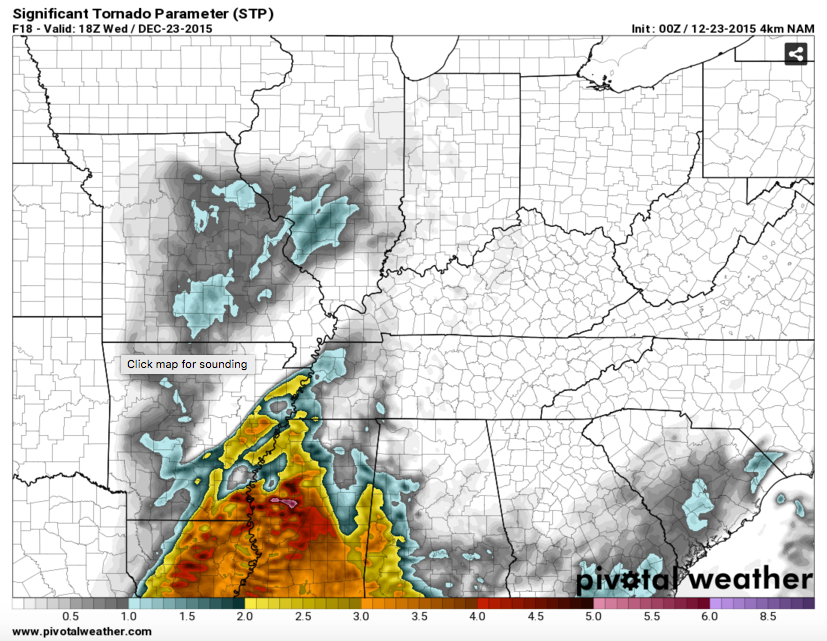 Again, nothing is ever certain, but this could end up being a high-impact severe weather event. I wouldn’t be surprised if SPC upgrades parts of the enhanced risk to a moderate risk for parts of Mississippi, Alabama, and western Tennessee. If you’ll be traveling during this time, please check the weather frequently and have a plan in place if you live in any of the mentioned locations.

Latest SPC Outlook (will be updated in an hour or two):