We have been keeping a close watch on Hermine for what seems like a long time now, and it has taken quite a while to gets it act together. Initially, it struggled due to strong wind shear and drier air having a negative impact on the system, but as Hermine has moved into the eastern Gulf of Mexico, the storm has been able to intensify over the very warm waters and in a lighter shear environment.

Deeper convection has now developed around the center of circulation, and some of those outer bands are already moving across the state of Florida. Hermine has about another day to continue strengthening, and by the time the system makes landfall, it will likely have reached strong tropical storm strength or even a category 1 hurricane. If all goes as expected, it should make landfall somewhere along the Florida panhandle, and hurricane watches now extend from the Florida panhandle to western portions of the Florida coast.

As discussed earlier, a jet streak (a region of fast-moving air in the upper-levels of the atmosphere) has developed over parts of the southeastern U.S., and Hermine is moving in the right entrance region of this jet streak. Basically in this region, the air is accelerating in the upper-levels, which can aid in lowering pressures at the surface. The reason this is important in this case is that this could further ventilate Hermine and enhance strengthening/pressure drops at the surface. Aside from strengthening, this could also enhance thunderstorm development across portions of Florida, southern Georgia, parts of the Carolinas, and eventually northward along the East Coast leading to copious amounts of rain falling across these areas.

Luckily, Hermine will move out of that region rather quickly, and although some of the areas that I just mentioned could easily get 8 to 10 inches of rain with well over a foot in some locations, the system shouldn’t stall over those areas. Another interesting feature that will play into the mix is a frontal boundary that will be swinging southward into the Gulf coast states by late week, which will be yet another mechanism that could enhance heavy rainfall. So, we have favorable upper-level dynamics thanks to a developing jet steak, a tropical system, and a stalled frontal boundary. This has heavy rain event written all over it. All of this will unfold between Thursday into early weekend.

After that, the forecast even gets a bit trickier. A trough will continue to dig southward from the Great Lakes and begin to pull Hermine north and then northeastward. However, this isn’t a situation where we have a long-wave trough establishing itself over the eastern third of the U.S., a scenario that would allow for Hermine to move across Florida and then out to sea. The eastern trough is going to move out quickly and will be replaced by ridging over the Northeast, which will extend into eastern Canada. Surface high pressure will also build into the Northeast behind the trough with the high pressure center eventually moving just offshore. If Hermine doesn’t book it northeast quickly enough, it could actually get stuck under the blocking ridge and impact regions from the Mid-Atlantic to the Northeast. Under this scenario, it wouldn’t even be out of the question for a brief jog northwestward towards or into the coast to occur.

Some of the model guidance actually shows this occurring, but we can’t ignore the fact that forecast models have not been reliable in predicting the strength and track of Hermine, even the European model. However, it is something that we’ll have to watch, since this could slow down the forward-speed of Hermine as it impacts parts of the Mid-Atlantic. This is just something to watch as this could bring very heavy rainfall to those regions, along with strong winds.

Below is the latest 5-day forecast projected path of Hermine from the NHC. This generally goes right along with the consensus of the latest model guidance, so expect some changes in track for sure.

Although strength is important, the possible flooding situation should be taken just as seriously. A tornado threat will also develop tomorrow for northern Florida, southern Georgia and into southeastern coastal areas of South Carolina. This threat will shift northward for most of the Carolina coast by Friday.

These are projected rainfall totals through Tuesday night. The axis of heaviest rainfall could shift some as changes in the projected path forecast could occur. 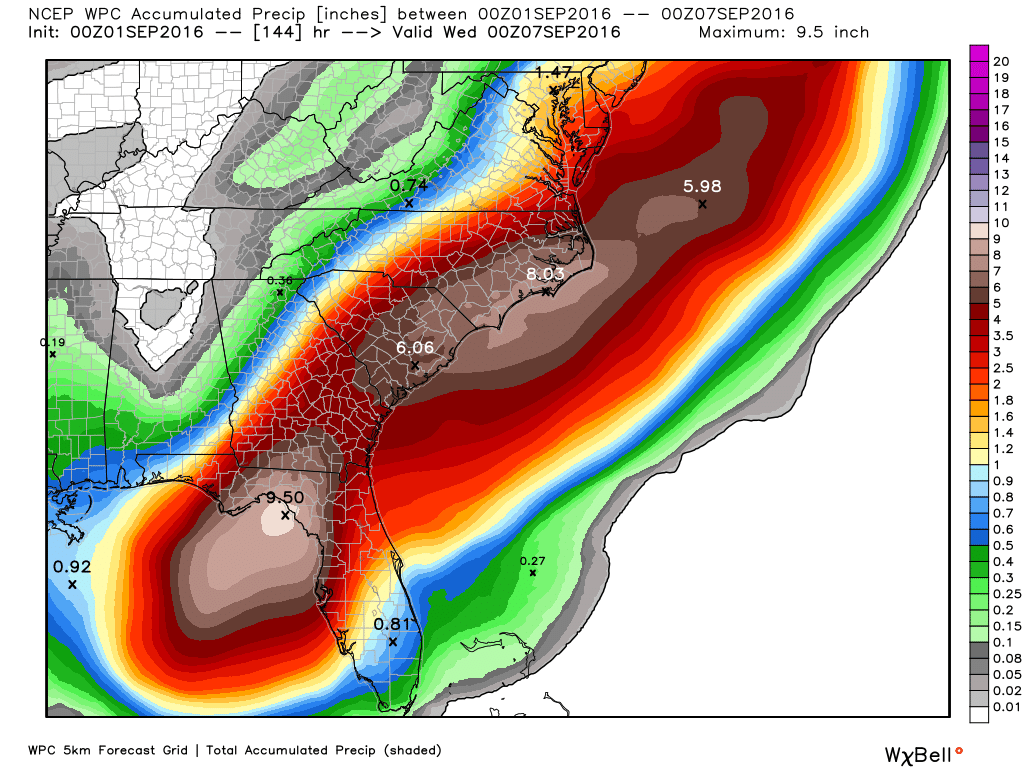