Tropics, Severe Weather/Tornadoes, and a Snowstorm

There is going to be A LOT to talk about through tomorrow/this weekend into next week. We’re currently in a pattern that is going to cause all sorts of weather including severe weather/strong tornadoes and flooding in the Plains, a snowstorm in the Rockies, and a sub-tropical/tropical system off the Carolina coast (which btw will probably be named Ana tonight or tomorrow).

Believe it or not, the pattern that is going to trigger a mulit-day outbreak of severe weather/tornadoes in the Plains beginning tomorrow going through Sunday is also responsible for the strengthening of the area of low pressure off the Carolina coast.

A long-wave trough is currently building into the western United States, which is going to continue to pump a ridge up over the northeastern United States into Canada. With this kind of setup, the low pressure system off the Carolina coast is going to get stuck because there will be nothing to steer it up the coast and eventually out to sea. Until that trough can get far enough east to pull the storm away, it’s just going to sit there and meander. 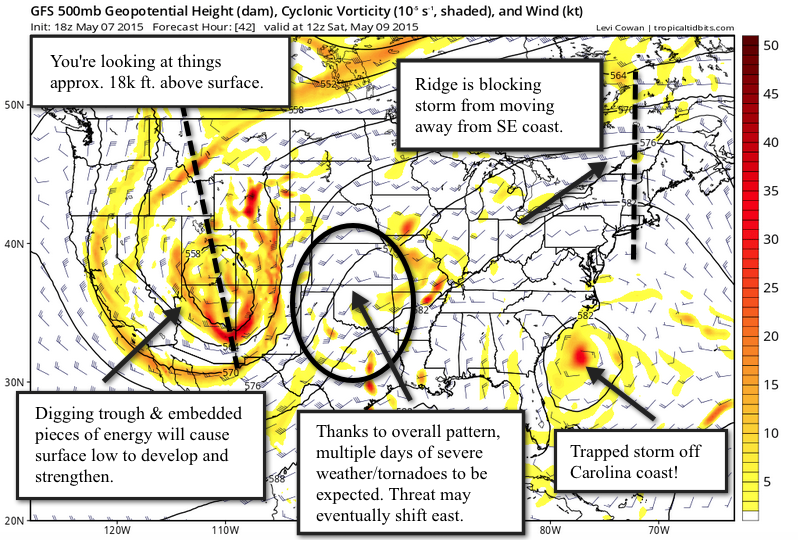 They flew out into the storm earlier today and found tropical storm force winds; however, they didn’t find one distinct closed circulation. As the system continues to organize, it’ll likely acquire the name Ana. What makes this forecast a bit tricky is trying to determine how strong this storm is going to get, which depends on where it sits. If it’s slightly farther west, it’ll be over the colder shelf waters, but if it’s a bit farther east, it’ll be over the warm Gulf stream and could strengthen more than expected. Forecast models are likely not handling this well as they never do in a blocking scenario like this.

Areas particularly on the Carolina coast need to watch this closely. Depending on track, you could get heavy rain, high surf, and even tropical storm force winds.

The same trough that is creating the block farther east is going to be responsible for probably one of the largest multi-day severe weather events since 2011 across the Plains. Saturday looks to be the biggest day for severe weather; however Friday and Sunday could be big days also. I plan to write up a forecast (tomorrow hopefully) on this severe weather situation once I study things a bit more tonight/tomorrow. In the meantime, I’ll be putting out some smaller updates on Twitter.

This same system will also be responsible for a snowstorm in the Rockies and maybe even some snow up near the Great Lakes closer to the U.S./Canadian border. Even southern California may get some rain/mountain snows out of this over the next couple of days!

So that’s your brief update for tonight! As you can see, all of this weather is connected, and it’s a pretty awesome science! Stay tuned for future updates.