We have a bit of a challenging forecast with this upcoming weekend storm, but that’s just a part of the game when you have an active pattern like we’re in. I explained some of this in my article last night, but I’m going to go into a few more details tonight. I’ll try to keep this article short. By the way, if you want me to continue doing video updates, be sure to go subscribe to the Firsthand Weather Youtube channel after you read this article. I realize that some of you prefer both videos and articles, only articles, or only videos.

The Arctic airmass that is currently digging south is nothing short of impressive. A deep trough is currently pushing south, along with a Canadian high pressure system that is going to really wrap around the cold air from Canada. The worst of the cold will occur over the next two days, but eventually this trough is going to start pushing eastward off the coast. The high pressure system will do the same thing and will be located along the East Coast by this weekend.

On the heels of this very cold air, a low pressure system is going to develop and strengthen somewhere around Oklahoma/Texas. There’s really no reason for this surface low to dig deep into the south, so I’m in agreement that this system will move northeast, eventually pulling up warm air from the Gulf, which will erode away the cold and dry air in place.

The challenge in this forecast is determining who will get frozen precipitation out ahead of the main low pressure system, because you must remember, the cold and dry air is still going to be located over the eastern U.S. before this storm moves east. The kind of pattern that is in place is going to support moisture spreading well east of the main low pressure center, and once it does, it will begin saturating the atmosphere and cooling temperatures even further. That high pressure system will definitely try to wedge in cold air east of the mountains, but even farther west, initially the precipitation that spreads over much of Tennessee/Kentucky, Arkansas, Missouri, northern Mississippi and Alabama could be snow and/or ice.

This shows frozen precipitation initially over the regions mentioned above: 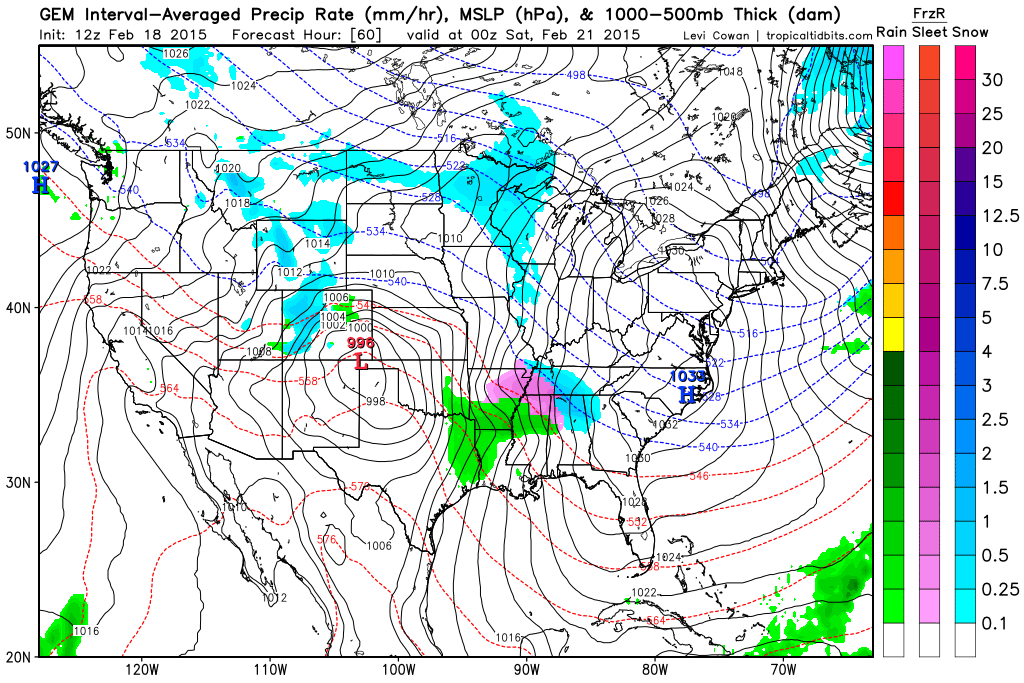 As the low pressure moves eastward, warm air flowing up from the Gulf would likely change the precipitation type over to freezing rain and eventually just rain. Winter storm watches have already been issued for many of the regions mentioned above because of the snow and ice that could occur for several hours.

Farther east, the biggest question is who has enough moisture available to work with. Places like northern Georgia (maybe even down into Atlanta), Upstate South Carolina (maybe even Midlands), parts of North Carolina, and northward up the coast could get hit pretty hard if moisture is available early on. That wedge of high pressure could really hold that cold air in place for a while, giving those regions snow and/or sleet initially and then possibly changing over to some freezing rain. This would all occur in the Friday night into Saturday timeframe. As this system does move east and pulls up warmer air, there would eventually be a changeover to rain later on Saturday or Sunday. 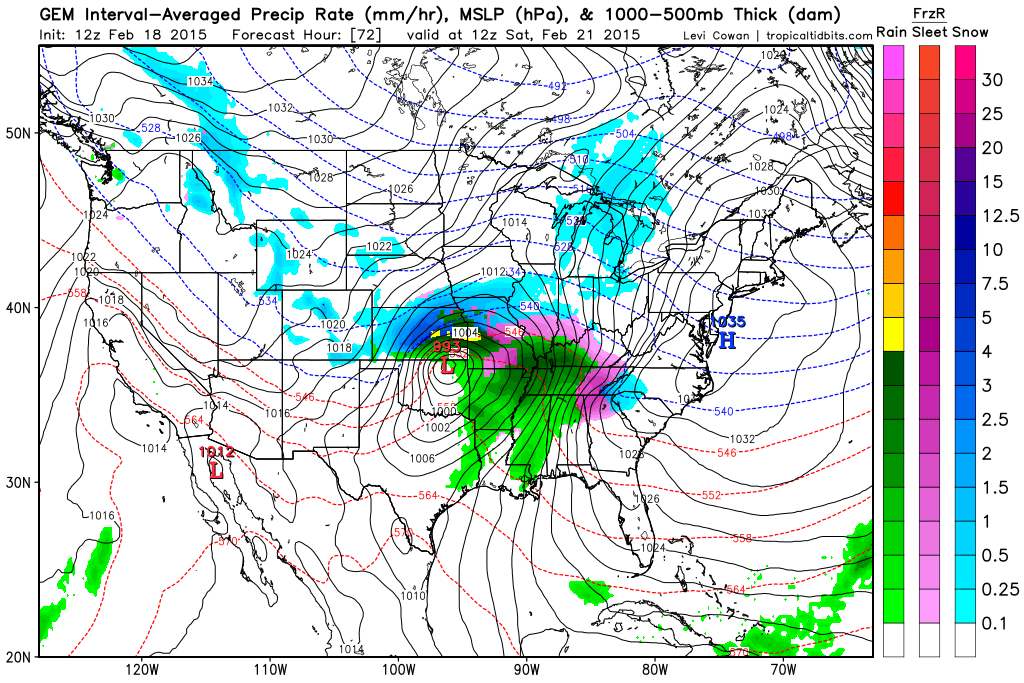 This system could bring another decent winter storm for areas farther north, but because the low is expected to track pretty far north, precipitation could even change to rain for those areas. Let’s hope it doesn’t rain too far north because that could really cause flooding issues with that heavy snowpack in place. That will be highly dependent on track.

I’ll continue to keep everyone updated, and I’ll be posting updates on social media. I’m sure some changes will have to be made to this forecast depending on how fast the moisture spreads east while the Arctic air is still in place, but overall, I agree with the track of this storm system.

By the way, next week/weekend looks very exciting and active. After this weekend, the 7 to 10 days beyond that could be the most activity many of you have seen in quite a while. Check out my latest post on Facebook regarding that.